On Tuesday (April 12), WingRiders, the Cardano-powered dentralized exchange (DEX) that Charles Hoskinson, Co-Founder and CEO of IO Global (IOG) had been “really looking forward to” in the past few months, has launched on the Cardano mainnet.

WingRiders is being developed by Slovakian FinTech startup Vacuumlabs, which is “a software development company that builds modern full stack fintech solutions for startups, scale-ups and incumbent banks.” Vacuumlabs first got involved with Cardano in 2018 when its developers started work on Adalite, which has become the world’s popular web-based Cardano wallet:

“In 2018, Vacuumlabs developers started an internal project to build the first Cardano light wallet. What was supposed to be a ‘weekend project’took weeks, but AdaLite was born. Since then, AdaLite has cemented itself as the leading web-based Cardano wallet, and along with it settled Vacuumlabs as a key development partner in the Cardano ecosystem.“

On January 26, the IOG CEO said he was “really looking forward” to the launch of WingRiders on the Cardano mainnnet.

Really looking forward to this DEX on Cardano. There are so many coming online soon https://t.co/q8M9403hIp

Given the pedigree of its developers, perhaps it is not surprising to see them proudly call WingRiders “The DEX on Cardano.”

WingRiders lets its users “swap”, “earn” (by providing liquidity), and “fly” (presumably to the moon with the help of native token $WR).

Here is some information about WingRiders (from version 1 of its Lightpaper):

“WingRiders is an Automated Market Maker (AMM) decentralized exchange (DEX) built on top of the Cardano using the eUTxO model on the main chain. The project is powered by VacuumLabs, one of the most widely respected developers in the Cardano space.

“WingRiders’ objective is to be an infrastructure element for the whole Cardano ecosystem, with simple integration into any wallet or Dapp. Accessible via many platforms, supporting connectors and Hardware wallets such as Ledger or Trezor. The platform will be fully decentralized and trustless supporting swaps between Cardano native tokens. Plans exceed the AMM, L1 and Cardano itself.“

Well, earlier today, the WingRiders team made the announcement that many Cardano community members had been impatiently waiting for.

In a blog post published today, the WingRiders team announced its “partnership with Milkomeda and Flint wallet, and their implementation of the Ethereum Virtual Machine (‘EVM’) on the Milkomeda sidechain protocol,” which runs on wADA (‘wrapped ADA’). The Milkomeda protocol is “a sidechain project on Cardano and allows fees to be paid by wADA.”

Blockchain startup dcSpark’s novel sidechain project Milkomeda allows EVM-compatible smart contracts to be executed from the Cardano mainnet. Furthermore, the Milkomeda project promises in future to deliver interoperability between Cardano and other layer one (“L1)” blockchains, such as Solana.

According to the team, the following is the first ever USDC transaction on Cardano mainnet: 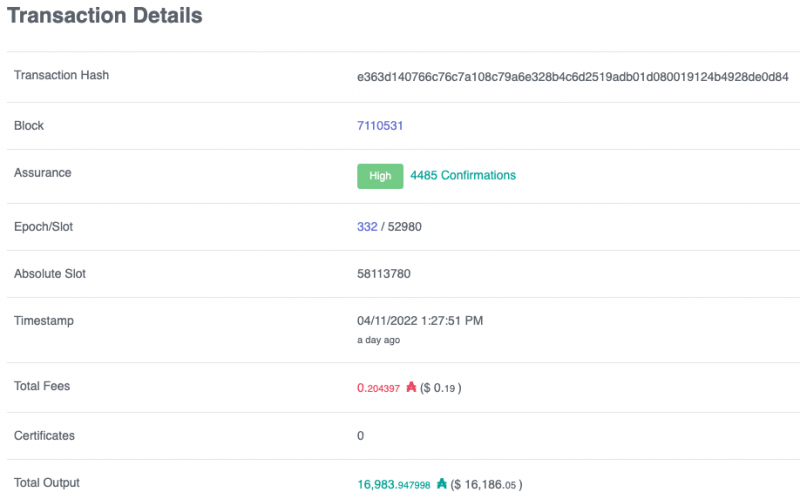 “WingRiders’ aim is to complete the journey of ERC20 tokens to the Cardano mainnet. With this partnership in place (Milkomeda and Flint) this functionality will be available from WingRiders DEX mainnet launch. This means that it will be relatively easy in the future to begin to include the more popular and common ERC-20 token pairs with Cardano native tokens on the WingRiders platform.“