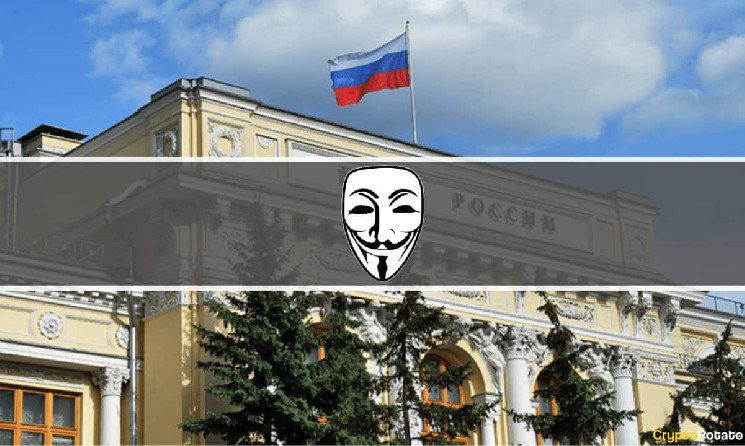 Anonymous has hit the Russian Federation again by hacking its central bank and threatening to release thousands of sensitive documents.

Additionally, the group continues to warn global companies that have not withdrawn from Russia to do so, otherwise, they could be hacked next.

It’s been precisely a month since Russian President Vladimir Putin launched his “special military operation” against its Eastern neighbor, and there’s no clear end in sight. NATO, the EU, and other countries refused to get directly involved in the war, despite condemning Russia’s actions.

Anonymous, the hacker group that’s nearly two decades old, also joined the fight against Russia. Initially, they breached over 30 Russian targets and collected over RUB 1 billion. Later on, the group offered Russian soldiers $52,000 worth of bitcoin to everyone who surrendered a tank.

Earlier on March 24, the group said on its Twitter page that it had exploited Russia’s central bank and threatened to release 35,000 files with “secret agreements” in the next two days.

JUST IN: The #Anonymous collective has hacked the Central Bank of Russia. More than 35.000 files will be released within 48 hours with secret agreements. #OpRussia pic.twitter.com/lop140ytcp

Although the number of companies leaving Russia continues to grow, there’re still quite a few that have refused to do so. As such, the hacker group has issued several warnings against those firms, publishing their logos, claiming that their time “is running out.”

Anonymous said they should feel “sorry for the innocent people who are being massacred violently in Ukraine” and urged them to halt their operations on Russian soil.

We once again call on companies that continue to operate in Russia: Immediately stop your activity in Russia if you feel sorry for the innocent people who are being massacred violently in Ukraine. Your time is running out. We do not forgive. We do not forget. #Anonymous #OpRussia pic.twitter.com/acAoTe5QYZ