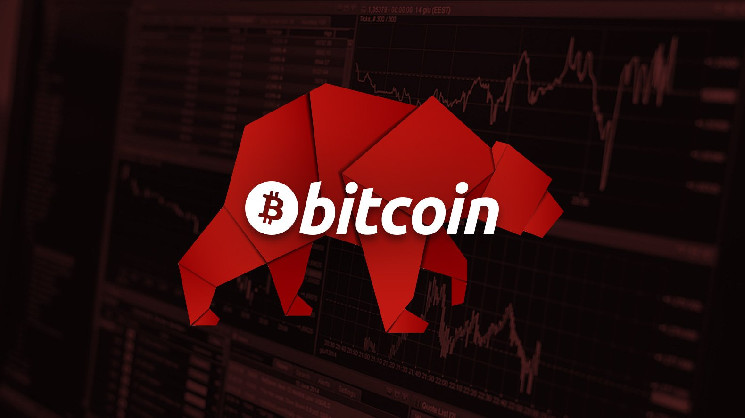 *Price at the time of publication

Bitcoin fell sharply today after the US Fed revealed a surprisingly high May Consumer Pirce Index (CPI) figure. The cryptocurrency had traded above $30,000 for most of the week but quickly plummeted on the alarming CPI figures. The price drop has caused BTC/USD to return to the July 2021 lows at $29,350 — a level that has provided strong support so far in June 2022.

The number one ranked cryptocurrency fell by 3% after the May CPI printed a 1% month-on-month and 8.6% year-on-year figure — the highest inflation numbers not seen since 1981;

As a result of the high inflation, it seems that traders are now expecting three more 50-basis-point interest rate hikes from the US Fed for June, July, and September;

Hotter-than expected US #inflation boosts chances for more Fed hikes. Trader now prices in 3 half-point rate hikes and and two more small steps. Now a key interest rate of almost 3% at the end of the year is priced in. pic.twitter.com/RYUPgK1qbt

The news comes after Bitcoin finally managed to end the nine-week red weekly candle losing streak. Unfortunately, the recent bearish information will likely start another string of red weekly candles if the significant support at the June 2021 lows is penetrated over the weekend.

The break beneath $30,000 will likely add further stress to the miners who have already been struggling in recent weeks. Looking at the Puell Multiple reding, a metric that measures the ratio of daily issuance value of bitcoin with the yearly moving average, we can see that we are currently sitting at 0.66 — the edge of the capitulation range; 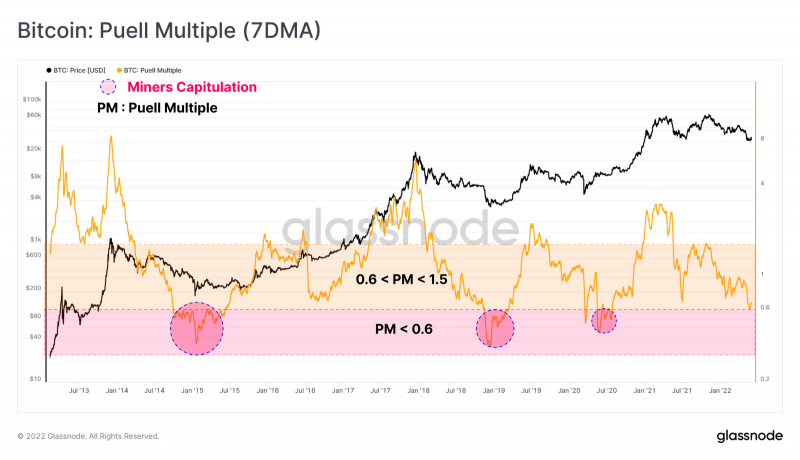 Typically, at the start of the bear market, the Puell Multiple will fall into the range of 0.6 to 1.0, indicating that current incomes are up to 40% more than the last year on average. It is sitting dangerously close to the miners’ capitulation zone, where miners sell off all of their BTC assets. If the Puell Multiple continues to drop, we might see miners selling more BTC to cover their mounting operational costs, which will increase the selling pressure and will likely drag BTC back to the May lows just above $25,000.

With the market continuing not to indicate its next direction, let us take a closer look at the charts and see the potential areas of support and resistance moving forward. 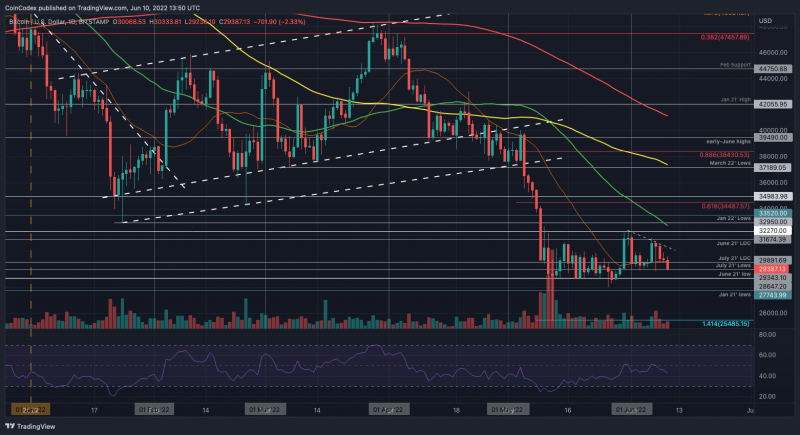 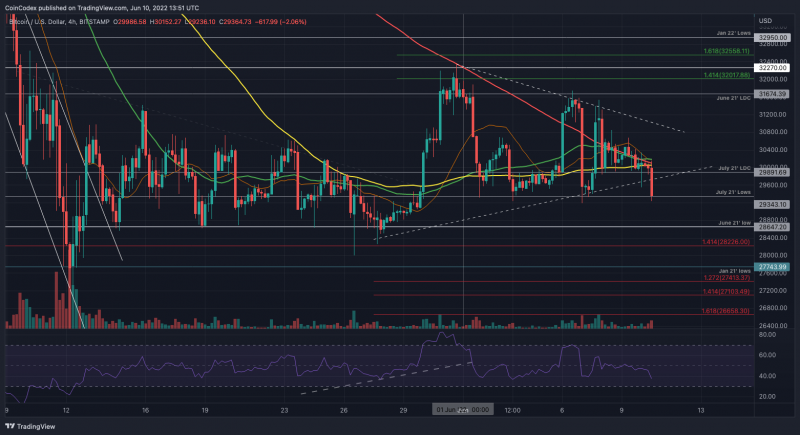 What has been going on?

The daily chart provides an overview of the pain that BTC holders have experienced over the past few months. BTC started the year in a hopeful position as it traded slowly higher inside an ascending price channel. The coin reached as high as $47,450 (bearish .382 Fib) toward the end of March before the sell-off started.

During April, BTC would go on to break beneath the lower boundary of the rising price channel, signaling the end of the pattern. It continued to plummet in the first few days of May during the Luna caused market capitulation, reaching as low as $25,485 during the peak of the volatility.

Luckily, the coin established strong support at $28,650 (June 2021 lows) and has remained above the level since.

The 4-hour chart provides a better perspective of price action in the near term.

We can see that BTC bounced from the $28,650 at the end of May but could not overcome resistance at $32,000. Since then, BTC has been relatively choppy as it remains highly volatile within the range between $32,000 and the current support at $29,350.

Bitcoin continues to remain bearish in the short term. BTC would need to break and close beneath the January 2021 lows for the bearish pressure to continue further.

To be considered bullish, it would have to continue above the May highs at $40,000.

So, where are we heading next?

Unfortunately, the daily RSI has produced a double top at neutral conditions and is heading lower again, indicating that the bearish momentum is increasing.