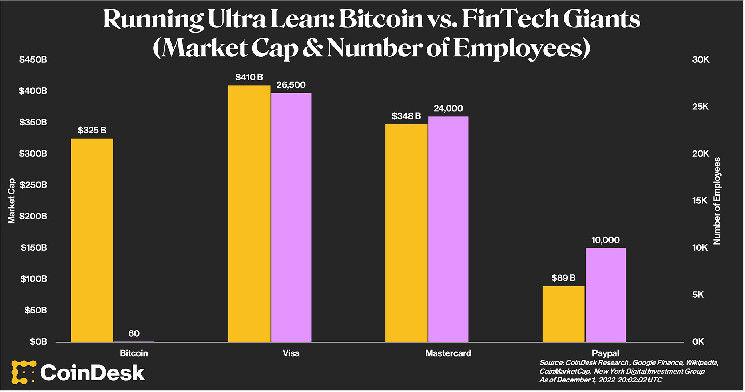 In a world where giants of the conventional financial system like Visa, Mastercard and PayPal employ tens of thousands of employees, Bitcoin continues to be run by a tight ship of just a few dozen active developers.

New York Digital Investment Group (NYDIG), a Bitcoin-focused investment firm, published a report in September chronicling Bitcoin’s 14-year evolution from a software development perspective. The report, titled “Developers of Bitcoin,” found that there are only 40 to 60 active developers. The document sheds light on how Bitcoin has steadily grown from an obscure technological breakthrough, to worldwide domination, and examines the software developers who made it all happen.

What’s most mind boggling, perhaps, is how the world’s most dominant cryptocurrency, currently worth about $320 billion, has been chugging along with no major hiccups for almost 14 years, under the care of a passionate – but small – group scattered across the globe.

“The purpose of the report was to help people understand Bitcoin’s development cycle: How it evolved from an idea circulated on a mailing group, to a pervasive technology today. And then, who are the people who continue to update the [Bitcoin] protocol,” explained Greg Cipolaro in an interview with CoinDesk. Cipolaro is NYDIG’s global head of research and co-author of the report.

Read more: So You Want to Be a Bitcoin Developer?

Satoshi Nakamoto, Bitcoin’s pseudonymous founder, published his whitepaper on Oct. 31, 2008, and subsequently launched the Bitcoin network on Jan. 3, 2009. He was soon joined by five other contributors, notably, Hal Finney, a developer and cypherpunk who became the first bitcoin transaction recipient (courtesy of Satoshi), and Laszlo Hanyec, a programmer who famously paid 10,000 BTC (almost $170 million today) for two pizzas.

With Satoshi at the helm, a community formed, but by 2010, that community had outgrown its founder. Realizing this, Satoshi gave Gavin Andresen the keys to the kingdom. Andresen, who was then an active contributor to the project, became Bitcoin’s “lead developer” and moved the project to open source collaboration platform, GitHub, paving the way for true decentralization.

“In a final email to developer Mike Hearn, Satoshi declared, ‘I’ve moved on to other things. It’s in good hands with Gavin and everyone,’” the report states.

Nowadays, Bitcoin developers can be found worldwide. Roughly 84% of its GitHub commits – or suggested software changes – come from 20 different countries.

“One of the interesting things I thought we uncovered in the report is the geographic location of the developers,” said Cipolaro. “It’s helpful for investors who may be concerned about who’s contributing and updating this piece of software. We know who they are and most of them seem to be in North America, Western Europe, those types of geographies.”

Another shift is the recent shelving of the lead developer/maintainer role in favor of a more egalitarian model that elects a group of maintainers instead. A “maintainer” is essentially a GitHub administrator with permission to approve software changes suggested by other developers.

Bitcoin by the numbers

According to the report, “code contributions have reached 200-400 commits monthly,” a steady, measured progression. And although Bitcoin’s core protocol averages 40 to 60 monthly active developers, 1,140 developers have contributed to the project since inception, with 5 to 20 new developers testing the waters every month (as others either scale back or leave). 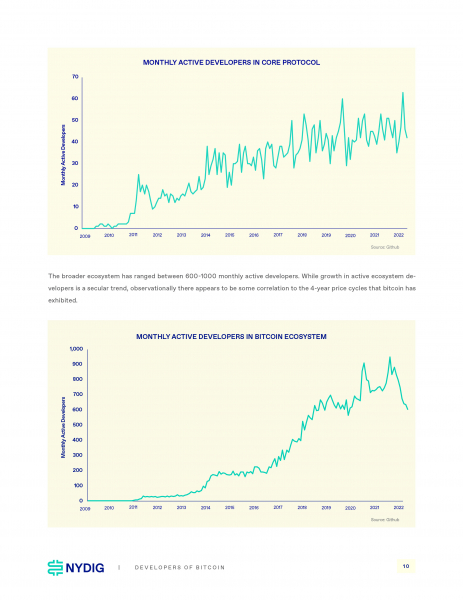 The broader ecosystem (developers working on Bitcoin related applications) follows a similar pattern, but, of course, with higher numbers. NYDIG estimates the number of monthly active developers in that wider community to be anywhere from 600 to 1,000, with the total number of contributors being over 13,000 since inception.

When compared to competing networks, Bitcoin always seems to come out smaller, but exponentially more efficient. For example, previous estimates from venture firm, Electric Capital’s 2021 developer report, show Ethereum has over 4,000 monthly active developers in its broader ecosystem, compared to Bitcoin’s 600 to 1,000, yet Ethereum’s current market capitalization is less than half of Bitcoin’s.

Similarly, traditional payment firms like Visa and Mastercard, with market capitalizations comparable to Bitcoin’s, are run by tens of thousands of full-time employees (Bitcoin developers are all volunteers, many of whom are part-time). These numbers seem to not only illustrate the “ultra lean” nature of the Bitcoin machine, but also, the purpose-driven orientation of its contributors.