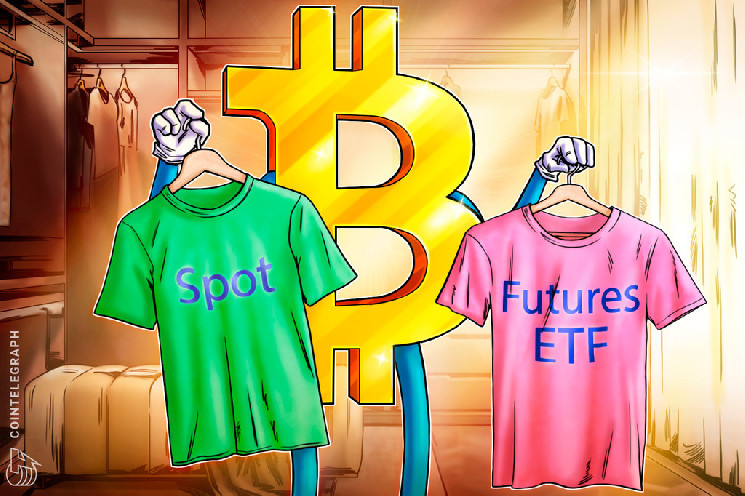 What is a Bitcoin ETF?

A Bitcoin exchange-traded fund (ETF) allows buyers to invest in Bitcoin without buying the actual asset. This investment method streamlines the buying process, enabling users to circumvent signing up for an exchange or dealing with crypto wallets.&nbsp;

In traditional investing, an ETF is a form of investment that tracks the price of either an asset or a group of assets. ETFs represent an easy way to invest in multiple assets concurrently without actually holding said assets.&nbsp;

That said, the Bitcoin ETF, in and of itself, is quite limited. The first so-called Bitcoin ETF, the ProShares Bitcoin Strategy ETF (BITO), launched in October 2021. However, this ETF doesn&rsquo;t invest directly in the asset, but in Bitcoin futures exchange-traded funds as an alternative, making ProShares&rsquo; offering more of a &ldquo;false&rdquo; ETF.

What is a Bitcoin futures ETF?

A Bitcoin futures ETF provides users the ability to bet on Bitcoin&rsquo;s price, having them agree to buy or sell Bitcoin at a specific price on a set date.&nbsp;

A Bitcoin futures ETF is an agreement in which one will buy or sell Bitcoin at a specified price on a pre-determined date. For example, when buying via the ProShares Bitcoin Strategy ETF, an investor could create a contract with ProShares to buy $10,000 in Bitcoin on June 15, regardless of Bitcoin&rsquo;s actual value on that date.

Why would one choose to buy Bitcoin on a future date despite the asset&rsquo;s volatility? It&rsquo;s because they have reason to believe that Bitcoin&rsquo;s price will be lower by then, and the entire process is carried out by the platform rather than the user. Plus, traders can also short the asset and create a sell contract.

Sure, one could simply just buy any amount of Bitcoin at any time without ProShares but a futures ETF ensures that users can invest in digital assets without inconveniencing themselves via exchanges. This method also costs less in fees when compared to most crypto exchanges. However, a futures ETF doesn&rsquo;t involve investing in Bitcoin at its spot price, which is why some enthusiasts might not consider the offering a &ldquo;real&rdquo; crypto adoption.

Also, companies that offer a Bitcoin futures ETF may charge annual fees to keep contracts and accounts open. That, and these ETFs can occasionally fail to track Bitcoin&rsquo;s price accurately. These issues leave many wanting an alternative ETF option in which to invest.

How does a Bitcoin ETF work?

A spot Bitcoin ETF provides the same streamlined investment capabilities as a Bitcoin futures ETF, but it only allows users to invest at Bitcoin&rsquo;s spot price rather than a future value.

A spot Bitcoin ETF brings all the benefits of a futures ETF, such as investing in Bitcoin without using an exchange, paying less in fees than on a crypto exchange, and streamlining the process overall. But a spot ETF invests in Bitcoin on the spot.

However, as of now, there&rsquo;s no such thing as an actual Bitcoin spot ETF due to the industry&rsquo;s nascent nature. Crypto industry pundits often fight for a firm to establish a Bitcoin spot ETF as they believe that markets will take Bitcoin seriously after a spot ETF has been established.

The fight for a Bitcoin spot ETF

The Bitcoin spot ETF does not yet exist, with crypto companies proposing various concepts to the Securities and Exchange Commission (SEC) over the years. However, a few companies have legitimized the Bitcoin futures ETF.&nbsp;

Crypto companies have fought to legitimize a Bitcoin spot ETF in the United States for years, but the SEC has yet to give in despite its recent two allegedly &ldquo;crypto-positive&rdquo; chairmen.&nbsp;

For instance, Jay Clayton, who was head of the SEC from May 4, 2017, to December 23, 2020, is a fan of Bitcoin as a store of value. However, no proposal convinced Clayton that a Bitcoin ETF of any kind was ready. Clayton&rsquo;s successor, Gary Gensler, approved ProShares&rsquo; BITO.

Other ETF proposals, including those from Valkyrie and Van Eck, have also seen approval. That said, one company, Grayscale, might be the first to implement a Bitcoin spot ETF.

Grayscale, which holds the world&rsquo;s only SEC-approved, publicly-traded Grayscale Bitcoin Trust (GBTC), proposed its Bitcoin spot ETF to the SEC in 2016. The group shortly withdrew its application in 2017 due to a stalemate in the conversation.

As of March 2022, Grayscale remains committed to converting GBTC to the world&rsquo;s first Bitcoin spot ETF, even threatening to sue the SEC if its latest attempts don&rsquo;t go through. In opposition, the SEC claims that market manipulation is its largest holdup to a Bitcoin spot ETF approval.

Bitcoin spot ETFs and Bitcoin futures ETFs both have their pros and cons.

While spot Bitcoin ETFs are certainly more &ldquo;legitimate&rdquo; than Bitcoin futures ETFs as they involve actually buying Bitcoin, it&rsquo;s hard to say which is better.

After all, a Bitcoin futures ETF might not involve buying in at Bitcoin&rsquo;s spot price, but it streamlines the buying process and allows investors to bet on the market whether they choose to short it or otherwise. In that same vein, some Bitcoin futures ETFs struggle to accurately track Bitcoin&rsquo;s price and many charge annual fees for holding contracts with the company.

Conversely, a Bitcoin spot ETF, according to many Bitcoin enthusiasts, will bring &ldquo;legitimacy&rdquo; to the asset as it&rsquo;s allowing users to invest in Bitcoin without actually holding it &mdash; and doing so at Bitcoin&rsquo;s actual price point.

How many Bitcoin ETFs are there?

There are various companies offering Bitcoin ETFs, and each is available on their own respective exchanges.

While the only Bitcoin ETFs in existence are Bitcoin futures ETFs, there are quite a few out there in which one can choose to invest. This article previously mentioned the ProShares BITO Bitcoin futures ETF, which currently holds around $1 billion in investments. BITO is listed on the Chicago Mercantile Exchange (CME).&nbsp;

There are various other Bitcoin futures ETFs on the market, but those mentioned previously are some of the most popular. Which ETF is best is up to the user, of course, as they&rsquo;re available on different exchanges, which can vary in rates.