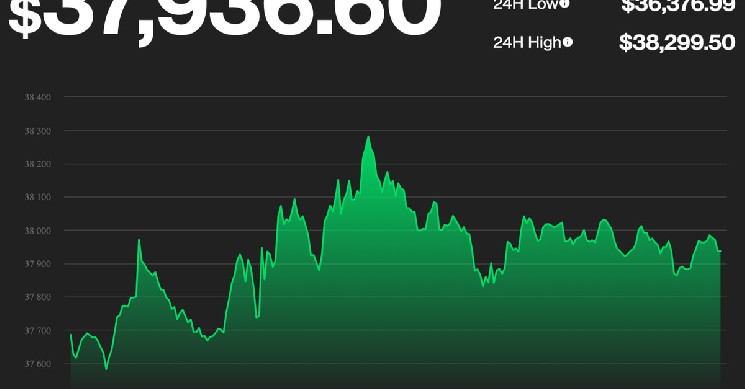 The largest cryptocurrency by market capitalization was changing hands at $38,009 at press time. Bitcoin had remained flat throughout most of the day Tuesday after opening at just below $37,000.

Biden said, for the first time, during a press conference Tuesday that he views Russia’s latest move into two separatist regions of Ukraine as an “invasion.” He announced sanctions on Russia that would effectively “cut off western finance,” Bloomberg reported.

Biden’s remarks Tuesday came a day after he announced smaller sanctions against Russia after the Kremlin said it was moving «peace-keeping» troops into Donetsk and Luhansk, which Russia has claimed as its own for years before the current escalation.

Biden also said the United States would provide additional supplies and troops to the nations in the Baltic region and Poland, according to Bloomberg.

Bitcoin investors have been monitoring the growing tensions over Ukraine as Russia reportedly ponders a full-scale invasion, though analysts are split over the long- and short-term implications.

Last week, the largest cryptocurrency by market capitalization dipped below $40,000 for the first time since Jan. 21 causing traders to ponder how Russia’s growing military presence in Ukraine will shake up the crypto market.

«For people like me who are very long-term focused and quietly accumulating bitcoin on a daily basis, it’s the asset that will supply the most security and value overall,» said Jason Deane, analyst at Quantum Economics. «For traders and speculators, it’s a simple trade equation designed to generate fiat. For them, it’s an exciting and volatile risk-on trade. The question is, whose narrative will be stronger?»

So far, bitcoin hasn’t been the inflation hedge many had hoped.

“Bitcoin is approaching a retest of the intermediate round level of $35,000, near where buyers became more active at the end of last month,” said Alex Kuptsikevich, senior financial analyst at FxPro. “Given the changed macroeconomic conditions, will the crypto remain as interesting at these same levels?”

He still believes fundamentals will drive the long growth for bitcoin is stronger as overarching tensions in Europe subside.

Don Kaufman, an analyst at TheoTrade, told CoinDesk TV last week that the prospect of large-scale sanctions against Russia could be a potential bull run for bitcoin as Russia looks to the crypto market to navigate potential global punishment for its Ukraine moves.

“Bitcoin could have one last major plunge before longer-term investors feel more confident coming back in,” said Edward Moya, analyst at Oanda.