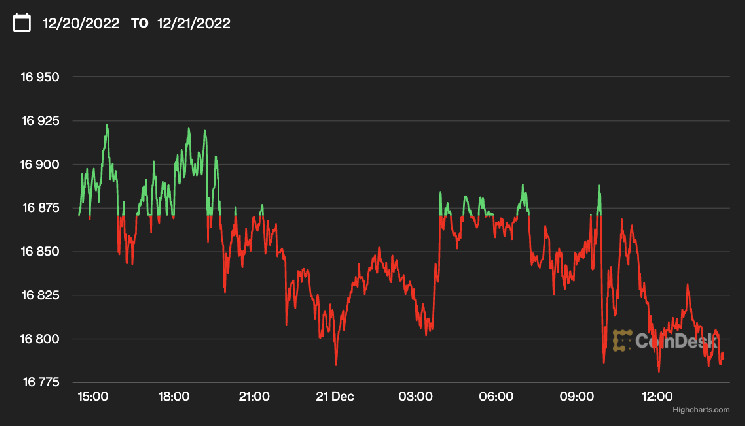 Bitcoin looked remarkably stable Wednesday, trading around $16,780 as traders wrestled with the uncertain market outlook for next year.

The largest cryptocurrency by market capitalization has been moving sideways at the range between $16,700 and $16,900 in the past 24 hours.

“Bitcoin isn’t getting much of a boost from the positive risk-on environment that is running through Wall Street,” Edward Moya, senior market analyst at foreign exchange Oanda, wrote in a Wednesday note.

U.S. equities were a bit more buoyant on Wednesday: The tech-heavy Nasdaq Composite was recently trading up 1.5%. The Dow Jones Industrial Average was up 1.4%, while the S&P 500 was up 1.4%.

Traders have been navigating the continuing nervousness over the potential market contagion from the FTX collapse over the past month and closely watching the Federal Reserve’s hawkish stance on possibly continuing to raise interest rates in 2023.

“The probability of a recession is high,” crypto trader Thomas Kralow previously said in an emailed comment. “People lose their jobs, the Fed pivots too late and we will see the same situation that played out back in 2008. When the Fed pivoted there was a relief rally for S&P 500, but as the interest rates finally started going down the market crashed another 40%.”

Kralow pointed out that the markets bottomed when the fed funds rate was basically at zero, adding: “This doesn’t bode well for bitcoin in 2023, and we could potentially see its price fall to $10,000 or even lower next year.”

To Alex Tapscott, managing director of the digital asset group at Ninepoint Partners, the current market environment is similar to December 2018 when bitcoin (BTC) hit a then-all-time highin the winter of 2017 and 2018 began “a long period of contraction” in terms of the value among crypto assets.

Tapscott told CoinDesk in an interview that the bitcoin drawdown from its all-time high in November 2021 is around 77%, compared to previous bear market lows of 84%, which could suggest further downside.

“But we are kind of in that sweet spot where it’s starting to look a lot like previous eras,” he said.

“You could try and pick a bottom and set yourself up for what I think is going to be a really strong period of growth,» he added. “But you might not get rewarded for being early because it might retest the same level a couple more times.”