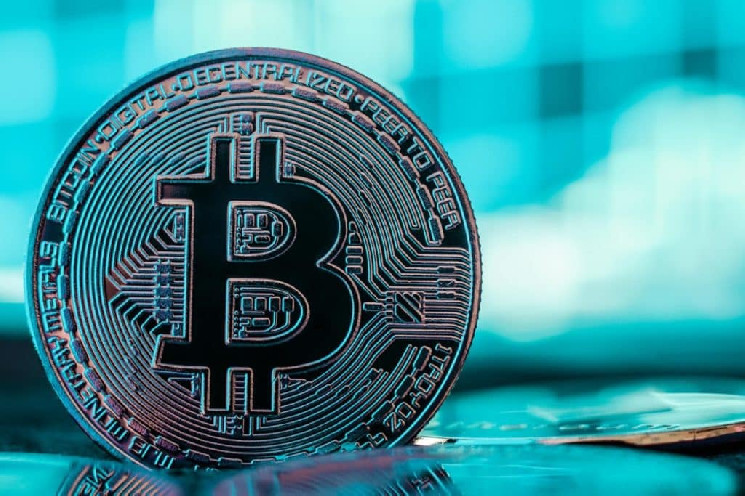 The failure of FTX seems to have caused a full-scale whale race to grab Bitcoin and Ethereum.

This is shown by CoinGecko’s recent study “How Many Crypto Whales have BTC or ETH On-Chain?” which exhibits a decidedly telling graph.

The graph of Bitcoin whales after the collapse of FTX 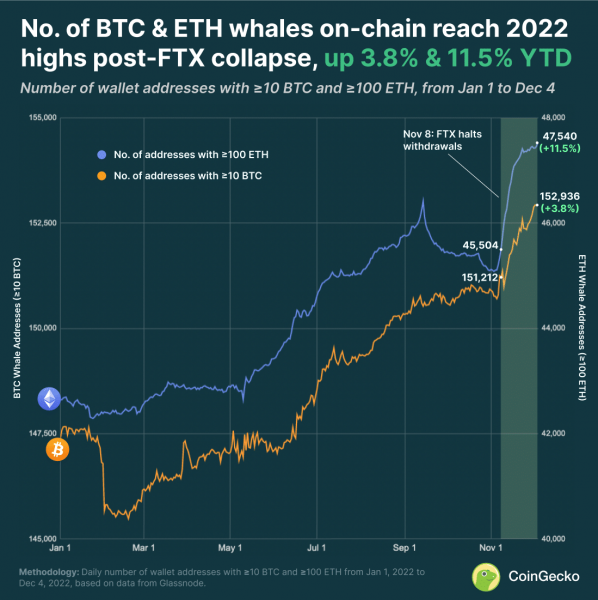 Two curves are shown in this graph

The orange one represents the change over time in the number of existing addresses on the Bitcoin blockchain with more than 10 BTC.

To be fair, 10 BTC are too few to qualify as whale addresses, but they give an idea of how the largest Bitcoin holders are behaving to the exclusion of small retail investors.

The purple curve, on the other hand, represents the change over time in the number of existing addresses on the Ethereum blockchain with more than 10 ETH.

It is immediately noticeable that starting in February this year, these two curves began to increase. This dynamic shows that the whales probably started accumulating as early as March, when the price of BTC was just under $40,000.

Actually, between May and June, this growth had stalled, probably related to the fears caused by the implosion of the Terra/Luna ecosystem and the failure of Celsius, Voyager, and 3AC.

However, by July the growth had begun again, up to a momentary annual peak between September and October.

Whereas between late October and early November, a reversal was occurring, with whales giving up BTC and ETH when Bitcoin’s price was around $20,000.

But then came the turnaround.

The failure of FTX and the accumulation of Bitcoin

Right around the time of the beginning of the collapse of the price of FTT, i.e., the FTX token, these two curves really started to surge.

As soon as Bitcoin’s price fell well below $20,000, the number of whale addresses began to rise rapidly and significantly, all the way to the end of November.

As for Bitcoin’s curve, at the end of October, the number of public addresses with at least 10 BTC was just under 151,000, while by the end of November it had skyrocketed to nearly 153,000.

In percentage terms, the increases on ETH’s purple curve are even greater, with a 5.8% increase from February to March, and a 5.5% increase in November. However, an initial spike had already occurred in early September, such that growth from that point was only 2%.

The cumulative increases in this parameter over the course of 2022 turn out to be 3.8% for Bitcoin and 11.5% for Ethereum, with the current values also being the annual highs.

Specifically for Bitcoin that high now stands at 152,936 addresses with more than 10 BTC as of 4 December, with 5,541 more addresses since the beginning of the year.

According to CoinGecko, there could be several causes behind this dynamic.

The first they cite concerns those whales who, after the collapse of the FTX centralized exchange, began withdrawing their funds from centralized exchanges and moving them to self-custody wallets. This would account for the speed with which this phenomenon occurred in November.

But CoinGecko also cites a second possible cause, namely purchases of BTC and ETH by whales to boost Bitcoin and Ethereum wallets, taking advantage of falling prices.

Indeed, while the first of these causes clearly justifies the November boom, it does not, however, justify the earlier growth. In fact, especially with regard to Bitcoin, nothing similar occurred when Celsius and Voyager failed.

So the phenomenon as a whole is probably mostly due to the second cause, on a yearly basis, although in November the first may have played a greater role.

CoinGecko traces the beginning of FTX’s collapse back to 6 November, which was the day that Binance’s CEO posted the tweet announcing that he would sell all their FTT tokens. At that time, the number of Bitcoin whale addresses was 150,792.

When FTX stopped withdrawals two days later, they had already increased by 420, most likely due to BTC withdrawals from exchanges.

So the greatest growth there was after Bitcoin’s price hit the yearly lows, on 10 November, and not during the FTX collapse. It is also worth mentioning that those were days when many feared that other centralized exchanges might also fail.

CoinGecko points out that the number of Bitcoin whale addresses in November increased at least 4 times faster than the annual average. In fact, after the FTX collapse, it increased at an average daily rate of +64 addresses per day from 8 November to 4 December, while in total over the course of 2022 the average was +15 addresses per day.

Moreover, it remains clear that those who take their tokens from exchanges to store them on a self-storage wallet are most likely doing so to store them for the medium to long term, that is, without the goal of reselling them any time soon.