A promising week for the digital asset markets ended poorly as geopolitical tensions pushed investors away from risk assets towards safe, low volatility assets. Bitcoin (BTC), the largest and oldest asset in crypto, was up ~1% over the last week. The 2nd and 4th largest assets in crypto, Ethereum (ETH), and Binance-coin (BNB), were both down ~4%.

The drive for investors to reallocate towards safe havens began after warnings issued by American president Joe Biden on Thursday night. Biden has asked all American citizens to leave Ukraine amid growing fears that Russia may invade the country. Biden told Lester Holt of NBC News “We’re dealing with one of the largest armies in the world. This is a very different situation, and things could go crazy quickly.”

Over the last week, Russian premier Vladimir Putin has kept his cards close to his chest. He has not ruled out diplomacy but has also reiterated that Russia will not back down easily and sent signals that he would be willing to start an all-out war with the West over Ukraine. The economic toll of a war like this would be enormous.

Combined with the geopolitical tensions, global inflation concerns are still growing, and a sharp Fed interest rate hike seems inevitable. In this macro-environment, crypto and equity indices suffered last week while ‘safe’ investments like the US dollar and gold rose in value.

For most of February 2022, crypto investors have found the conviction to buy back into markets despite numerous bearish macro signals. As the end of last week arrived, however, the urge to allocate towards safe, secure investments grew too strong.

While bearish, external macro tailwinds have dragged the price of BTC’s price back, the fundamentals of the network continue to grow stronger. On February 12th the hashrate of the Bitcoin blockchain after spiking upwards by more than 30% and hitting 248.11M TH/s.

Hashrate hitting an all-time-high means that Bitcoin is the most secure it has ever been. A rising hashrate also indicates a willingness of miners to deploy long-term capital into Bitcoin. This indicates a faith that rewards earned in the future will pay off for their investments made today.

In 2021, China’s blanket ban on cryptocurrency activity made mining bitcoins illegal. China was the largest contributor to Bitcoin hashrate for many years leading up to the ban.

The shift in policy created concerns surrounding the continuing ability of Bitcoin miners to support the network. Miners however have been able to redeploy mining capital to new countries and regions like the USA, Russia, and Kazakhstan. This has been an endorsement of the resilience and adaptability of the network.

Crypto news for the week ahead

Alpaca Finance is a leveraged yield farming product that was originally built on the Binance Smart Chain. It is set to launch on Fantom on Tuesday. There will be a significant 1-month yield incentive program for liquidity providers who provide FTM liquidity to the new version of Alpaca. New liquidity providers will be offered Alpaca native tokens in return for their service.

Onchain governance-based PoW chain Decred (DCR) has announced that it will be implementing a mandatory hard fork on Sunday. PoW miners that do not upgrade by February 21, 2022 will have their rewards reduced to zero. The upgrade will include consensus vote agendas, it will reduce sync time, and include other upgrades to improve the speed and fees of the network. The price of DCR is up ~11% in the last month. 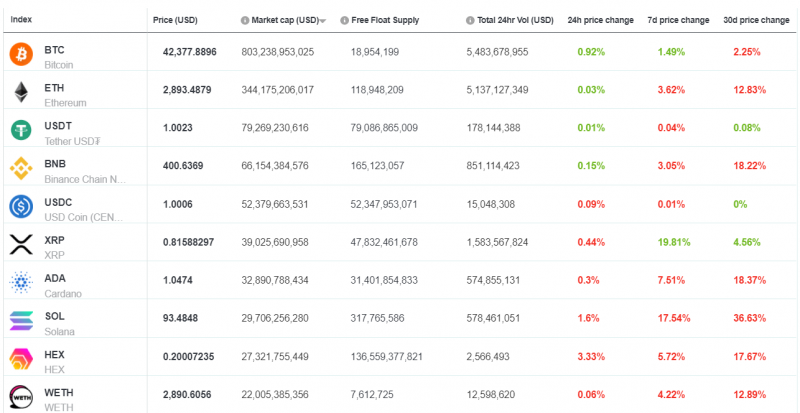 Most large-cap crypto assets pulled back alongside Bitcoin as there was a run to safety and away from volatile assets across financial markets. Despite some data providers reporting that the 24-hour transaction volume on the Cardano network is higher than that of the Bitcoin and Ethereum network, the price of ADA is down ~8%. It has been announced that the upcoming Basho scaling upgrade of Cardano will increase transaction block sizes and include memory improvements to support the now burgeoning blockchain. 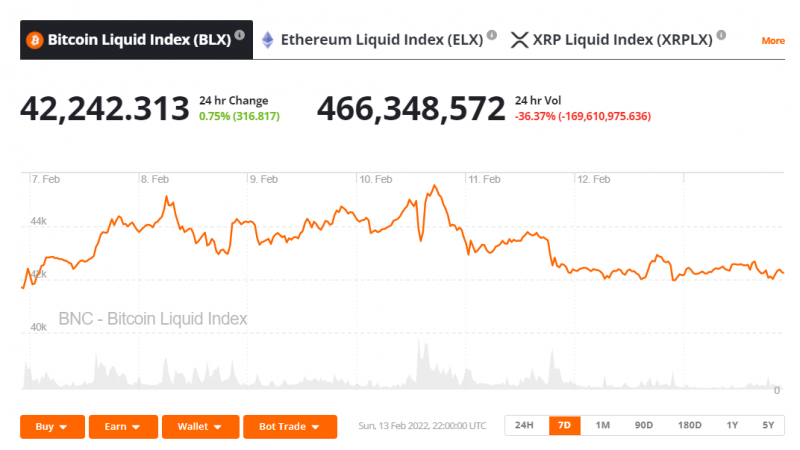 Bitcoin (BTC) pulled back in the 2nd half of last week after an extended rally that pushed the price of the asset from trading at ~US$33,000 on January 24th to ~US$45,500 on February 10th. Data from Glassnode reports that the BTC Open Interest in Perpetual Futures Contracts just reached a 6-month low of $398,374,990 on derivatives exchange Deribit. Additionally the Stablecoin supply on exchanges has hit almost $29 billion, a new all-time high. These metrics indicate that money is now sitting on the sidelines and the risk preference for investors is low.