Bitcoin (BTC) dropped ~2% versus the previous week despite positive news that the second sovereign nation to date (the Central African Republic) had adopted it as legal tender. Ethereum (ETH) and Binance coin (BNB), the second and third largest assets on the Brave New Coin market cap table, dropped ~4% and ~3% respectively.

The Brazilian Senate voted in favor of a cryptocurrency regulation bill this week — but still needs further approval before it can be signed into law. The new law would require exchanges to be accredited by an institution designated by the federal government and would set new punishments for cryptocurrency fraud. But not all aspects of the potential law come with a heavy hand. It also seeks to eliminate taxes for acquisition and importation of both hardware and software for use in “green mining” until 2029.

As for the ongoing war in Ukraine, international headlines still highlight the possibility of the Russian government using cryptocurrencies as a way for the country to move money into the country amidst economic sanctions and the US and Europe having essentially cut Russia out of the SWIFT payment network.

Both Kraken CEO Jesse Powell and Chainalysis co-founder Jonathan Levin commented this week in separate interviews why Russia is unlikely to have moved any meaningful amounts of money into the country via this method. First, Powell argues, to purchase any significant amounts of cryptocurrency, Russia would need to first buy USD. But as Russia has been largely cut out of the world financial system, this becomes increasingly difficult to do. Also, onchain transactions are highly traceable, and Levin confirms that “systemic levels” of evasion are not, as of yet, coming across its radar.

Crypto news for the week ahead

Huobi Global will launch SYS/USDT (Syscoin/Tether) spot trading this week. Syscoin markets itself as a decentralized and open source protocol and “the only layer-1 Blockchain that scales with EVM [Ethereum Virtual Machine] functionality”.

Trending at #1 this week on CoinMarketCal was the Pussy Punks NFT. The group plans to launch a set of 500 NFTs as part of an initial effort to dominate the memecoin market. More details on the launch can be found on the official website here. Their work is available on the OpenSea NFT market here. 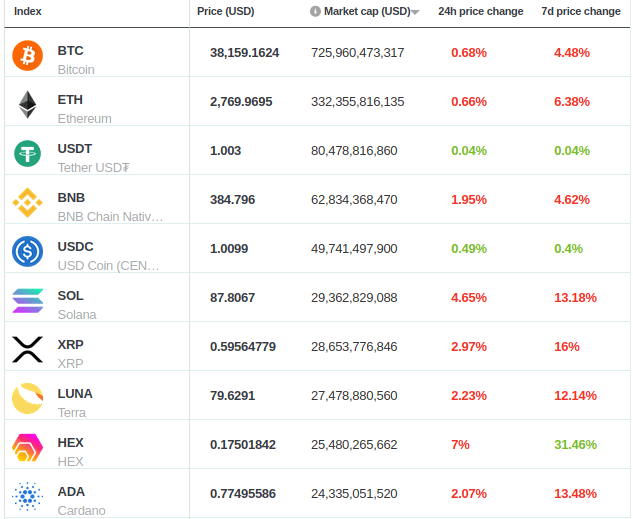 Seven down prices yet again this week amongst ongoing uncertainty in international markets. Cardano’s ADA native token suffered the largest drop (13.48%) versus the previous week on the top-10 list by market cap. Cardano (the organization) initially launched its proof-of-stake (PoS) blockchain in 2017 and claims to be the first “founded on peer-reviewed research and developed through evidence-based methods”. The price drop occurred despite a positive announcement this week from Cardano development company Input Output: to increase the block size from 80 to 88KB. 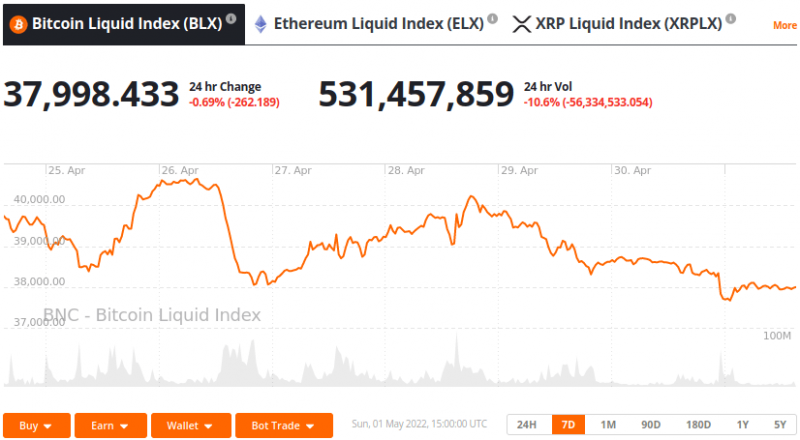 Glassnode released a technical presentation this week that (beyond the ongoing headlines of macroeconomic uncertainty with high inflation, war in the Ukraine, etc.) may explain some of Bitcoin’s recent bearishness. The analysis looked at Bitcoin “perpetual swaps” — first pioneered by BitMEX — which are essentially futures contracts without an end date. Glassnode noted that a large portion of traders previously utilizing calendar futures (with end dates) have either moved into perpetual swaps or have left the market altogether. The explanation given is that if Bitcoin futures are yielding only around 3% (or less) with official inflation figures at 8.5%, then traders yield negative returns. Glassnode argues that this makes the 10-year treasury bond relatively more attractive, especially for buyers operating in the traditional financial sector. (As a counterpoint to Glassnode’s point on bond yields, see American billionaire investor Ray Dalio’s very different viewpoint).