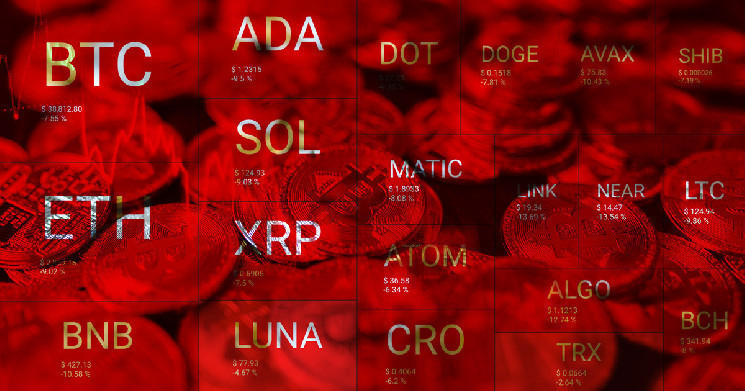 Thursday evening (GMT) saw the start of the crypto market slide. Of the top 100, excluding stablecoins, only Safemoon, Leo, and BitTorrent managed to stay green over the last 24-hours.

Before the slide, the total crypto market cap was valued at $2.029 trillion. Over the course of the night and into the early hours of Friday, a brutal sell-off ensued, wiping $200 billion from cryptocurrency valuations.

Social media chatter reveals a mix of rallying cries to hold strong, including talk of this being the last opportunity to buy Bitcoin under $40,000. In contrast, others say this is the start of an enduring bear market.

Either way, what’s behind this latest drop?

In recent weeks, there has been a circulating narrative that investors are fleeing risk-on assets, such as cryptocurrencies and tech stocks.

At that time, analysts had pinned the issue on various factors, including discovering a new variant, civil unrest in Kazahkstan, and the Fed signaling a new hawkish stance to combat inflationary fears.

The recent sell-off suggests dwindling confidence over the idea of the Fed shrinking its balance sheet along with looming interest rate rises.

In another blow, Russia’s central bank said it is putting together a proposal to ban the use and mining of crypto.

“the central bank said speculative demand primarily determined cryptocurrencies’ rapid growth and that they carried characteristics of a financial pyramid, warning of potential bubbles in the market, threatening financial stability and citizens.”

The proposal calls for the prevention of financial institutions from dealing with cryptocurrencies. It also mentioned systems being developed to block on and off ramps, including a ban on crypto exchanges.

Joseph Edwards, the Head of Financial Strategy at Solrise Group, played down the macro effect of the proposal. Edwards said Moscow has made similar threats before, but unlike China, Russia has never been a significant crypto market.

“Moscow, like Beijing, is always rattling its sabre over ‘crypto bans’, but Russia has never been a pillar of any facet of the industry in the same way as China has been at times.”