The general cryptocurrency market is experiencing a sell-off after finding a relief rally from positive inflation and Consumer Price Index (CPI) data in the United States. The latest correction has left investors waiting for a possible bottom that would likely trigger a new rally.

However, it is worth noting that the current state of the market has no decisive bullish triggers, with the impact of the macroeconomic news fading away. Indeed, several cryptocurrencies remain in focus after recording mixed performance in recent days. The following are the cryptocurrencies to look out for the week of December 19.

Besides the recent relief rally across the cryptocurrency market, TON has remained among the stand-out digital assets trading in the green zone. Notably, Toncoin, backed by messaging platform Telegram, has benefited from positive network development and adoption news.

The recent rally has emerged following the announcement of the TON/USDT pair for futures trading on the gate.io exchange and support by the SafePal crypto wallet. Furthermore, the asset rallied after Telegram announced that users could purchase blockchain-based identities through Toncoin. The new feature allows users to bypass the need to use a SIM card.

Furthermore, following the FTX cryptocurrency exchange collapse crisis, Telegram announced a plan to establish a trading platform. If the plan is realized, TON is likely to find more use cases under the platform.

By press time, TON was trading at $ 2.63 with daily gains of almost 8%. On the weekly chart, TON has rallied over 35%. Due to the impressive returns, TON ranked among the most resilient digital assets despite the market downturn. 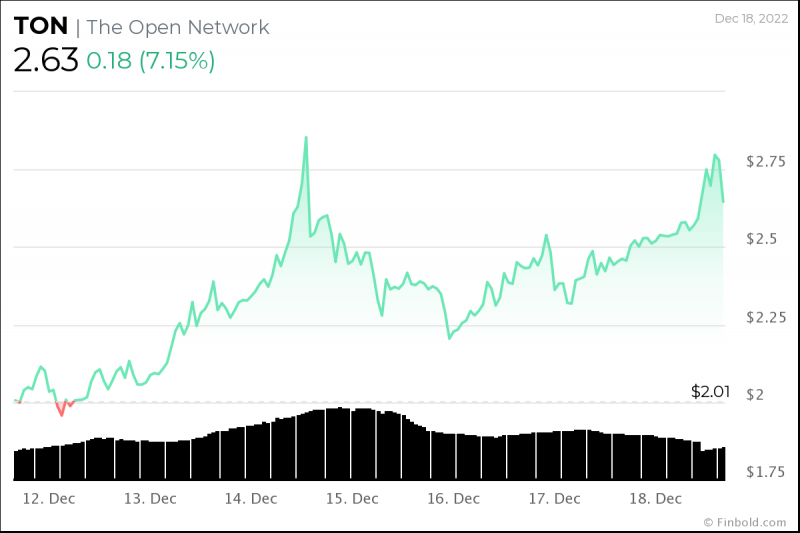 Elsewhere, TON technical analysis remains bullish, with the one-day gauges on TradingView aligning with ‘buy’ sentiment at 15 while moving averages are for a ‘strong buy’ at 13. The oscillator gauges remain neutral at six.

The network has recorded success in recent weeks, also powered by adoption and development-related news that appears to give XDC token access to more users. For instance, as XDC exhibits resilience, the network deployed STATIS’s EURS stablecoin on its platform. At the same time, the network joined a 12-week liquidity mining campaign on gate.io and KuCoin exchanges.

Investors anticipate the XDC Network’s continuous improvements and different upgrades will be a bullish trigger for the token.

At the moment, XDC is changing hands at $0.02, gaining over 2% in the last 24 hours, while the weekly chart has recorded gains of almost 9%. 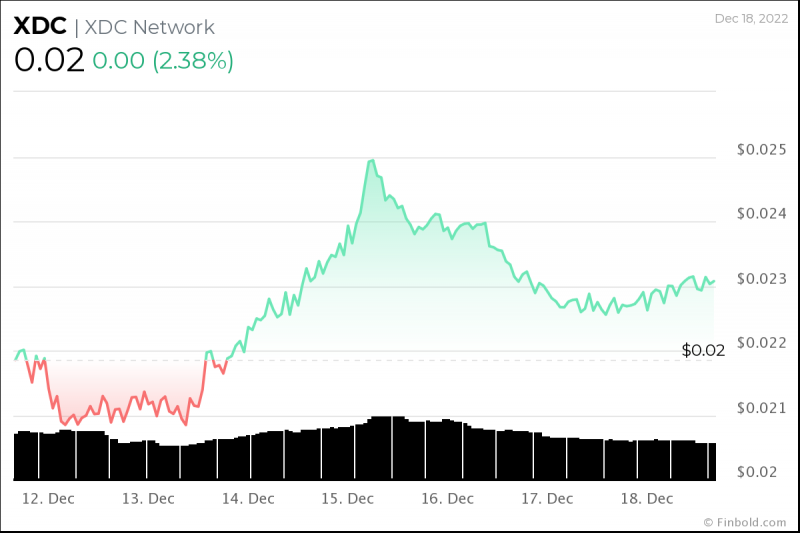 Interestingly, XDC technical analysis is dominated by bearish sentiments. A summary of the gauges is neutral at 9, similar to moving averages at 1.

OKB is the native token of the OKB blockchain and crypto exchange OKX. Holding the token has several benefits, like discounts on trading fees and the opportunity to generate passive money. Furthermore, OKB holders are rewarded when OKX burns some of the currency’s supply.

Overall, since the emergence of OKB, the asset has recorded success with dynamic price movements, with the average price remaining resilient despite the extended market crash.

At the moment, OKB is trading at $22.38 with gains of 2% in the last 24 hours, while the weekly chart shows the token has rallied almost 6%. Notably, OKB has been trading near resistance with support at $19. The asset is facing resistance at $23. 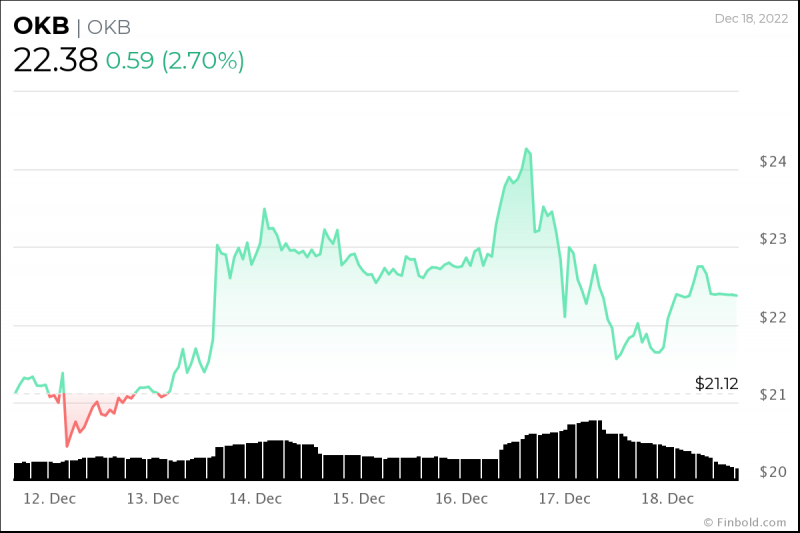 The current OKB bullish moment has extended to the technical analysis. A summary of the daily gauges is standing with the ‘strong buy’ sentiment at 17, similar to moving averages at 14.

XRP, the native token of blockchain firm Ripple, remains at the center of interest for the crypto industry amid the ongoing case with the Securities Exchange Commission (SEC). Notably, XRP has recently recorded significant gains appearing unfazed by the general crypto market downturn. The XRP gains were mainly linked to Ripple’s minor wins in the ongoing case. At the moment, both parties have made final submissions and are awaiting the final ruling. Indeed, the token has been impacted by the general market correction after failing to hold on to recent gains. Notably, the XRP community was targeting the $0.50 position, which has been invalidated by increased bear activity. As reported by Finbold, XRP could reclaim the $0.50 level if the bulls headed the token hit $0.40. However, failure to hold the $0.39 position has opened up further corrections.

At the moment, the outcome of the Ripple and SEC case remains the fundamental aspect of XRP’s price trajectory. Indeed, legal experts continue to speculate about the possible outcome, with crypto players showing divisions in regard to the case. In particular, as reported by Finbold, following constant attacks, Cardano (ADA) founder Charles Hoskinson stated that he would no longer comment on the XRP case.

As XRP struggles with price volatility, the technical analysis offers mixed signals with a summary of the one-day technical on TradingView aligning with ‘sell’ sentiment at 15 while moving averages are for a ‘strong sell’ at 13.

Bitcoin (BTC) was among the biggest beneficiaries of the positive inflation data, with the asset reclaiming the $18,000 level at some point, The position also emerged as the five-week high for the flagship cryptocurrency. However, the bears have overpowered Bitcoin bulls at the moment, with the asset facing further corrections below $17,000.

As reported by Finbold, crypto trading expert and analyst Michaël van de Poppe pointed out that Bitcoin is likely to encounter a temporary rally in the wake of the macroeconomic developments. Notably, the relief rally was extended after the Federal Reserve raised interest rates by 50 basis points. However, Bitcoin appears to be still impacted by other factors, like the fallout from the FTX crypto exchange collapse.

At the same time, in a YouTube video posted on December 18, Poppe noted that Bitcoin needs to clear key resistance before rallying again. 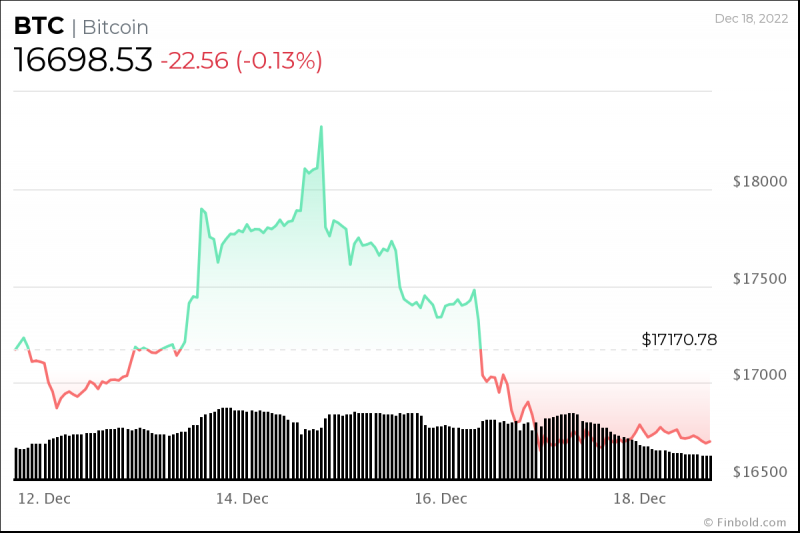 Elsewhere, Bitcoin’s technical analysis remains bearish, with a summary of the daily gauges on TradingView going with the ‘sell’ sentiment at 15, while moving averages are for a ‘strong sell’ at 13. Oscillators remain ‘neutral’ at 9.

Moving into the week of December 19, the crypto market is facing increased uncertainty. With the macroeconomic impact appearing powerless, investors are looking at other related activities like the uncertainty around the Binance crypto exchange. At the moment, there are concerns regarding Binance’s reserves alongside possible prosecution in the United States.

MATIC May Take The Crypto Market By Surprise, Here’s Why

MATIC May Take The Crypto Market By Surprise, Here’s Why