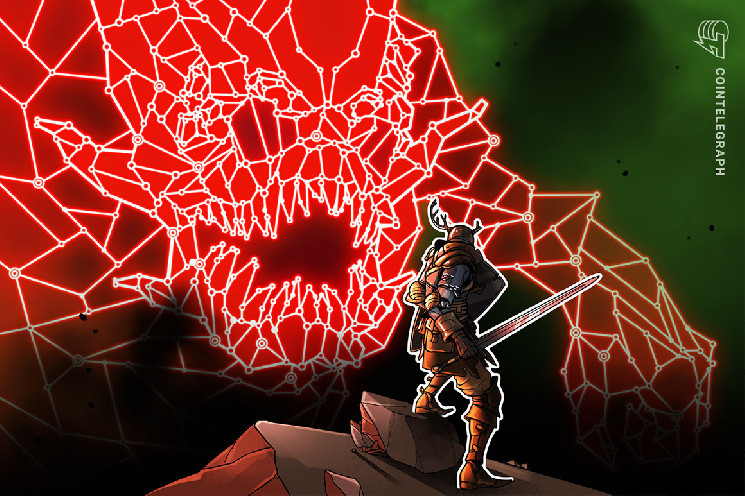 Blockchain-based play-to-earn (P2E) games stole the show in 2021, exploding from a fringe hobby into a major part of the decentralized space. They even helped people in developing economies put food on the table, as these games’ economic models do not shun things like farming in-game currency and items to re-sell to other players, which many non-blockchain massively multiplayer online games (MMOs) frown on, to say the least. 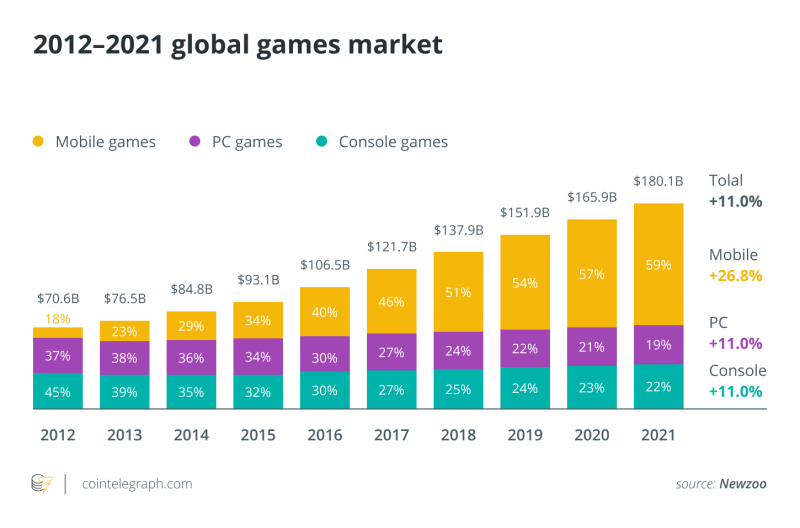 The mainstream gaming industry was taking notes as the P2E rocketship shot for the moon — and its flight has left the industry bitterly splintered. On the one hand, top executives from leading games companies, such as Ubisoft and Square Enix, set their sights on the new market, seeing new business models, new revenue streams, new monetization opportunities — and telling investors that they’re in on what the cool kids are doing can always score a few bonus points.

On the other hand, though, gamers themselves were less impressed, lashing out against blockchain initiatives even from beloved developers. Developers aren’t rushing to embrace the novel tech, it seems: About 70% of game developers have no appetite for blockchain or crypto, a major recent poll showed. This also means that 30% are interested to various degrees, but the overall sentiment is negative.

Interestningly, the survey included some of the concerns that developers had about developing games on the blockchain. These mostly amounted to all the regular criticisms the crypto community has long grown used to — the environmental impact, scams and monetization concerns. Well, let’s get things straight once again, this time focusing especially on the gaming world.

No, blockchain doesn’t have to set Earth on fire

Blockchain’s environmental impact is the lowest-hanging fruit for a critic to go after but, at this point, this probably has more to do with the perception of the industry than its actual state of affairs. Yes, it is true that Ethereum, the second-largest blockchain by market cap, has a high carbon footprint due to its use of the proof-of-work consensus mechanism — but nothing compels you to develop on Ethereum in the first place.

It’s no secret that sustainability is one of the major fronts in the DeFi battle for Ethereum’s throne. Multiple other blockchains, from Cardano and Avalanche to WAX and BNB Chain, flaunt their low energy consumption to attract more eco-friendly dev teams. Blockchain gaming is no different, and the vast majority of game developers build their projects on eco-friendly chains.

Granted, the main reason for building on Ethereum is the fact that you enter a developed ecosystem worth almost $310 billion, which is more promising for your bottom line than moving into one with a lower market cap. That being said, cool projects bring more people and transactions into any blockchain network, which drives up its token price and market cap. Furthermore, as dozens of chains support the Ethereum Virtual Machine, which is the runtime environment for smart contracts, developers will have an easy time migrating their apps back to Ethereum once the network fully moves to proof-of-stake. Moreover, developers can take one step further and build sustainability into their economy by design. They can hard-code royalty payments to carbon offset providers into their NFTs and tokens, committing themselves to eco-friendliness in the firmest way possible. Energy and finance are already shopping hard for carbon credits, after all, so it could make sense to adopt a similar strategy as part of a larger quest for eco-friendly decentralization. Sure, this would carve into the studio’s earnings, but sustainability is worth it.

No, blockchain isn’t all about scams

Crypto does have a scam problem — that is undoubtedly true. Over the past year, scammers, fraudsters and hackers were able to make off with $14 billion worth of cryptocurrency. Crypto scams come in all shapes and sizes, including rug pulls, social engineering, and pump-and-dumps. Everyone entering the space should be aware of the possible risks, that’s for sure.

That said, though, the mainstream gaming industry has a scam problem too, and it actually spiked in 2021, as Lloyds Bank found. COVID-19 brought more people and money into gaming, and scammers go wherever money flows, using all of the tried and tested techniques, from phishing to malicious third-party sites claiming to offer free in-game currencies. At the same time, the survey revealed, only 8% of gamers had seen tips on how to spot fraudsters. In both industries, there are also cases of questionable behavior on the developer side. From crowd-funded projects sitting for years without updates to early releases sold on Steam without ever seeing further development, the mainstream stage is not without its scammers. On the crypto side of things, there are, similarly, developers disappearing with the money raised through token sales and other scams.

All in all, fraud can happen in any space incorporating anything of value, whether it’s a magical sword that helps your game character deal with those pesky dragons or, let’s say, real estate. Both for crypto and mainstream games, education must play a major role in eradicating scams. Developers working on blockchain projects should make sure to convey the ABCs of avoiding fraud to gamers at every possible opportunity.

At the same time, the crypto space offers additional safeguards against scams. When integrating with decentralized services, such as exchanges or yield farms, developers can inspect their code on-chain, as it’s available in the open. They can also use the maturity and market cap of specific protocols as a measure of their security, as both are indicative of the larger investor trust and more solid protections.

No, blockchain isn’t bad for monetization

The concern about possible monetization issues seems somewhat misplaced at first glance. Blockchain was designed from the get-go as a protocol for transferring value, which, if anything, is actually quite conducive to monetization efforts. A P2E game naturally has to include a strong economic component that would allow both players and developers to turn in a profit. 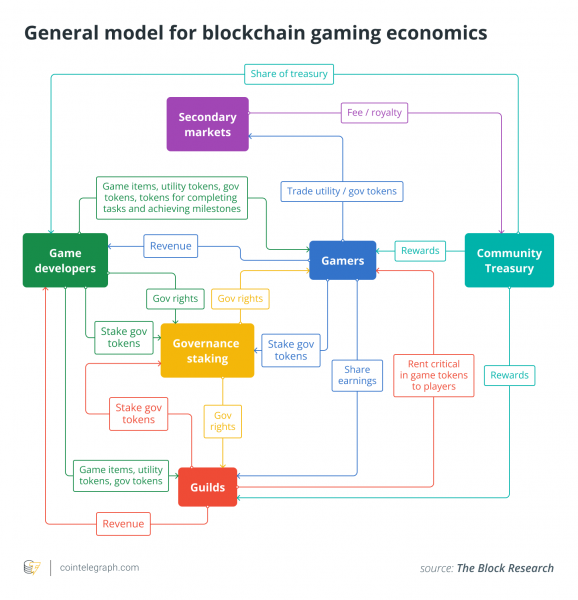 At the same time, though, there is a problem here. Any blockchain game becomes part of the larger ecosystem. This ecosystem is inherently turbulent, volatile, and speculative, and these are risks both players and developers must be ready to weather to even get into the business. Here is one quick example: To play an NFT game, you usually have to bear the upfront cost of purchasing your NFTs. To be able to do that, you first have to buy the chain’s native token that the game sits on, which means exposure to its fluctuations that will also be there if you want to cash out by selling your NFTs later. Similarly, any fungible in-game tokens will inevitably bounce up and down in value with the overall crypto market. Or will they?

The answer, once again, depends on the choices that the developers make. The studio can opt to build the game’s economy around a stablecoin, which does not fluctuate in value over time despite whatever rollercoaster ride the crypto market is on. The reason why teams rarely do that is that they are looking for a token economy that will soar fast, which is only possible with a more dynamic coin. It also creates the risk of extra instability on top of the general crypto market movements, as an economy built this way can begin to collapse as soon as the token flips or the player base growth slows down.

Developers can, however, avoid this problem by getting more creative with their monetization. They can use the programmable nature of blockchain tokens to algorithmically control their price dynamics through burning and minting them based on the demand and wider market fluctuations. At the same time, they can add indirect monetization through second-market fees on NFT sales, which would effectively make for an endless revenue cycle and align their interests with those of the users. If developers release NFT content that players want, they will be able to get a cut in all of the subsequent resales, thus compensating for what they could have made by driving up their token’s price.

Like any other technology, blockchain is not inherently good or evil. It’s a protocol with its own design flaws that savvy developers can mitigate by making smart design choices. While not every game has to embrace decentralized technology, there is nothing wrong with experimenting with the value that blockchain brings to game design, and doing so in a safe and sustainable manner is first and foremost a matter of choice.

VeChain To Integrate Blockchain Into Apparel, Food and Pharmaceuticals Industries With This Partnership

Galaxy Digital to provide market data to blockchains with Chainlink

VeChain To Integrate Blockchain Into Apparel, Food and Pharmaceuticals Industries With This Partnership

Galaxy Digital to provide market data to blockchains with Chainlink