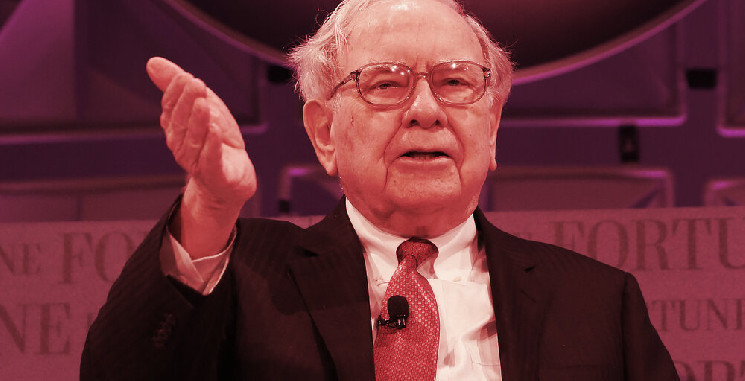 Warren Buffett has again criticized Bitcoin, making the case that it’s only the dollar that has intrinsic value, according to a CNBC report.

“Whether [Bitcoin] goes up or down in the next year, or five or ten years, I don’t know. But the one thing I’m pretty sure of is that it doesn’t produce anything,” Buffet said at the Berkshire Hathaway annual shareholder meeting on Saturday.

The billionaire, who has previously called Bitcoin a “delusion” and “rat poison squared,” also stated that even the most lucrative offer wouldn’t convince him to invest in crypto.

“Now, if you told me you own all of the Bitcoin in the world and you offered it to me for $25, I wouldn’t take it because what would I do with it? I’d have to sell it back to you one way or another. It isn’t going to do anything,” said Buffet.

The leading cryptocurrency appears to have responded positively amid the news and is trading at about $38,900 on Monday morning, up 2.3% over the past 24 hours, per CoinMarketCap.

Founded in 1839, Berkshire Hathaway is an American multinational conglomerate holding company with over $330 billion in assets under management.

The firm’s top holdings include Apple, Bank of America, American Express, and Coca-Cola. Last year, Berkshire also purchased about $1 billion worth of Activision Blizzard stock and recently increased its position in the video game giant to about 9.5% of its shares.

It’s so wild he says this stuff while nakedly shilling diabetes. pic.twitter.com/k4cy20PVpd

For Buffett, assets have to have value, which means they “have to deliver something to somebody.

Buffet stressed that people might create all kinds of things, even a hypothetical “Berkshire coin,” but in the end, “that’s what money is,” he said, displaying a $20 bill.

“In my life, I try and avoid things that are stupid and evil and make me look bad in comparison to somebody else—and Bitcoin does all three,” Munger said.

Explaining his stance, Munger said Bitcoin “is stupid because it’s still likely to go to zero” and is “evil because it undermines the Federal Reserve System.”

“And third, it makes us look foolish compared to the Communist leader in China. He was smart enough to ban Bitcoin in China,” concluded Munger.