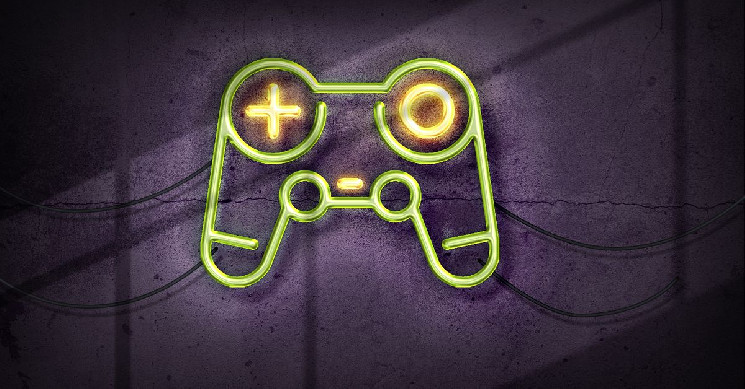 Markets and prices: Bitcoin and ether rose slightly. Major indexes and gold were in the red.

Insights: GameFi faces a shaky future in the Asia-Pacific region partly because of strict regulations.

Technician’s take: BTC is 43% off its all-time high near $69K, and upside appears limited.

Catch the latest episodes of CoinDesk TV for insightful interviews with crypto industry leaders and analysis.

Bitcoin was up slightly on Tuesday but was still trading near its January lows when the largest crypto by market cap shed about 50% of its value. At the time of publication, Bitcoin was trading at about $38,100, about 2.5% higher than its price 24 hours ago.

Ether, the second largest crypto by market cap, was trading just over $2,600, up nearly 2% for the same period. Most other major cryptos were in the green. Investors continued to monitor the escalating tensions on the Russia-Ukraine border. OANDA Senior Market Analyst, The Americas Edward Moya, wrote in an email that bitcoin’s price could fluctuate significantly for the near future.

«Cryptos remain the ultimate risky asset and the escalation Russia-Ukraine will likely keep the volatility elevated with swings to 20% in either direction,» Moya said, although he added that «geopolitical tensions» and a more hawkish monetary position by the U.S. central bank are getting close to being priced in.»

«This Crypto winter has been brutal but it might end once we get past that first Fed rate hike,» Moya said.

Billions of dollars have been deployed to the GameFi industry. But did anyone check with regulators in Asia, the most dynamic and important market for gaming and crypto?

If they did, they’d see that many regulators are hostile to GameFi. This isn’t reflected in laws made recently to address decentralized finance (DeFi), but rather from those already in existence.

As CoinDesk reported earlier this month, countries like South Korea and China have had laws about converting in-game tokens into fiat currency for nearly 15 years. The popularity of a game called Sea Talk, which had a liquid exchange market for tokens to won, made the government write laws that specifically addressed the issue.

Article 28 of Korea’s Gaming Industry Promotion Act — gaming is a serious industry in Korea and has its own regulatory code — strictly prohibits speculative acts, gambling and free gifts while Article 32 prohibits converting game tokens into cash.

In China, there are similar laws on the books. The mid-2000s popularity of Tencent’s QQ coins, tokens that were freely convertible to Chinese yuan, made the People’s Bank of China come down hard on the industry. Then, in 2017, the PBoC banned crypto trading entirely.

Finally, in Japan, legal experts are convinced that GameFi as a whole should be considered gambling.

One would think that investors pumping in billions of dollars to the sector would do a bit of due diligence first. You don’t need industry consultants to tell you that Asia is the world’s most important gaming market with its nearly one billion gamers.

After all, billions are invested to capture billions of players, right?

Not really. GameFi isn’t about the gamers – yet. It’s about the yield.

Axie Infinity, with its long runway of VC cash, has 106,000 daily active users, mostly from developing countries like the Philippines. In contrast, according to data from Steam, some of the most popular games on the platform like Counter-Strike have active users in the 500,000 range, peaking weekly at around one million active users.

Do a quick sanity check and think about how many of your gaming friends are playing a blockchain game at the moment. Not talking about it, but playing it.

Just how many of these Axie Infinity users are actually gamers? Probably very few; the game isn’t known for its stunning gameplay – reviewers say that all it consists of is mindless clicking. Other blockchain games are said to not be much better.

Unless these games get good and start attracting players, this is all going to come crashing down soon.

Already Axie’s players are earning less than Jollibee’s employees as the in-game economy suffers from crippling inflation. With nobody actually wanting to play the game and everyone just wanting the yield, Axie’s ‘‘central bankers‘’ are having a tough time. Good thing there are no midterms.

It’s a tough sell for VCs eyeing demand in the Asia-Pacific region. These games can’t go mainstream in Asia’s major markets because authorities would crack down using laws they already have on the books. Yet, even if VCs don’t seem inclined to slow down with their GameFi deal-flow anytime soon, there’s going to be a point when they start getting nervous.

Too bad we can’t return to the simpler days of World of Warcraft’s gold farming, when China churned out digital gold for players in the West by “grinding” through monotonous tasks in-game (did you know that Steve Bannon once operated a World of Warcraft gold forex desk?). Everything old is new again, but World of Warcraft didn’t have fancy crypto tokens that are the apple in every VC’s eye. 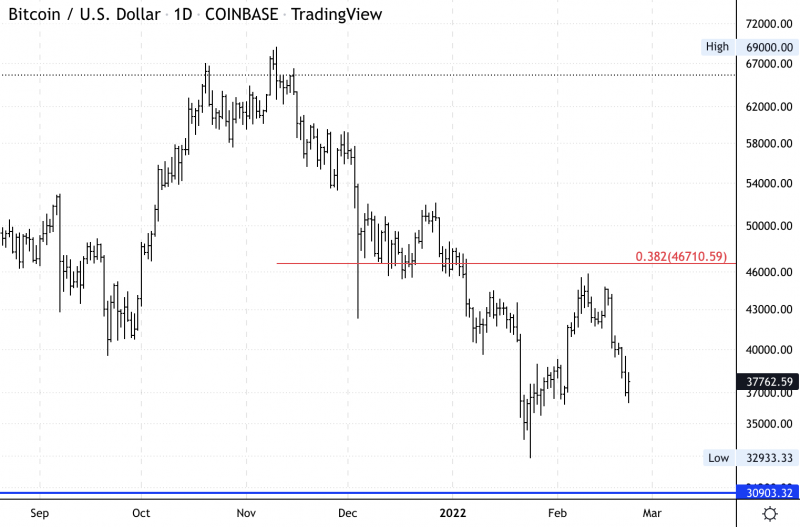 Bitcoin (BTC) sellers were active over the weekend, which contributed to negative momentum. The cryptocurrency appears to be oversold on intraday charts, although a price bounce could be limited toward $40,000 resistance. Lower support is seen around $30,000, which could stabilize the sell-off.

BTC is down roughly 15% over the past week.

The downtrend since November 2021 remains intact, albeit within a long-term uptrend. That means price action has a tendency to rise exponentially following cycle lows. For now, indicators do not suggest BTC is at a cycle low.

Previous drawdowns suggest selling pressure could continue over the short-term.

In this cycle, buyers will need to maintain support around the $27,000-$30,000 support zone to maintain the broader trend.