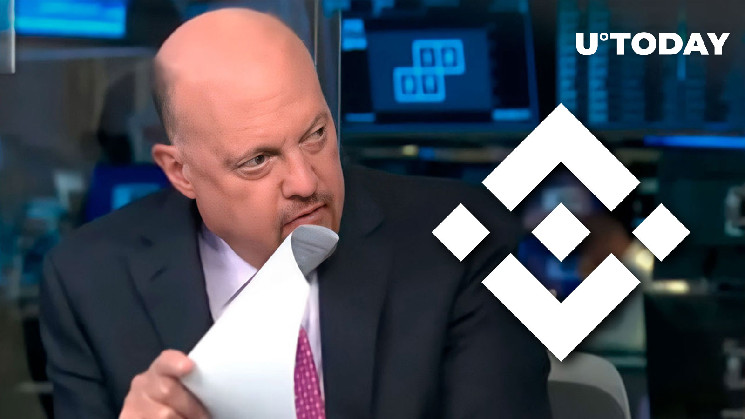 In a Friday tweet, longtime CNBC host Jim Cramer argues that Binance, the largest cryptocurrency exchange by trading volume, has «no real legitimacy» following the implosion of its main rival.

Cramer adds that he would trust his money more in DraftKings, a sports betting company, than in Binance.

This is not the first time that the financial guru has taken aim at the world’s largest cryptocurrency exchange.

On Dec. 14, Binance CEO Changpeng Zhao poured cold water on Binance’s attempts to reassure the market amid concerns about the exchange’s asset reserves and a massive number of withdrawals.

Binance CEO Changpeng Zhao came up with a snarky reply, half-joking that Cramer should refrain from using Binance «for the sake of everyone else.»

Zhao was also quick to downplay the stock picker’s most recent warning, tweeting that the exchange is now safe, alluding to Cramer’s questionable history of market predictions over his decades-long career.

Zhao has also traded some barbs with «Shark Tank» star Kevin O’Leary after the latter accused Binance of intentionally putting FTX, its key competitor, out of business during a recent congressional hearing. The Binance CEO disputed this claim and accused the Canadian businessman of lying.

Earlier today, O’Leary defended his side of the story in an interview with CNBC. «CZ called me a liar and suggested I perjured myself in front of the U.S. Senate for two hours this week. I can assure you that was not the case…I’m not happy about that,» he said.

In the meantime, the price of Bitcoin dropped sharply lower earlier today, revising the $16,000 level. The fresh bout of selling pressure came after Mazars, a Paris-based accounting and consulting group that performed a proof-of-reserves audit for Binance, suddenly announced that it had stopped working for cryptocurrency clients. According to Bloomberg, Mazars pulled the plug because the market did not find its PoR reports reassuring. The accounting group also rushed to scrub records, with Binance’s proof of reserves no longer being found on its website.

As reported by U.Today, Mazars did not include an «assurance conclusion» in Binance’s pseudo «audit,» which means that the firm does not actually vouch for its findings.