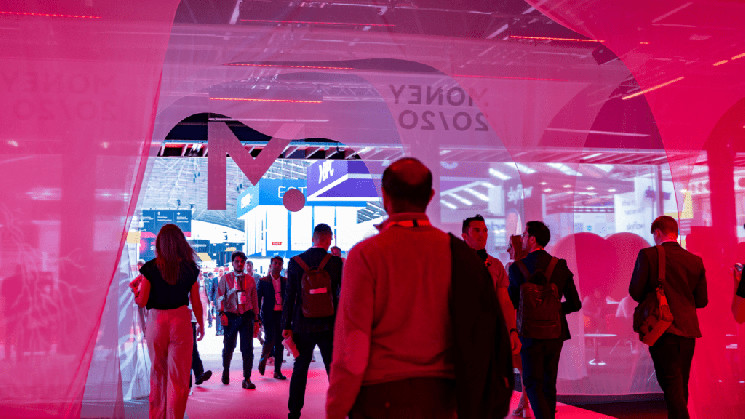 Bigwigs decked out in the buttoned-up suits of Wall Street representing the rails of traditional finance, from MasterCard to Visa, Stripe to JPMorgan, at Amsterdam’s Money20/20 conference this week largely relegated crypto to the sidelines.

The concept was more a curiosity than a tangible sector of finance — with execs from crypto-native companies such as Ripple and Kraken defending digital assets.

Compliance and anti-money laundering units Chainalysis and Elliptic commanded prominent floor space, directly opposite each other at entrance, like rivals battling over prospective TradFi clients. Tucked slightly further back were startups geared toward helping the institutional crowd access crypto exposure, such as Fireblocks and Copper.

Mainstage panels focused specifically on digital assets were generally tasked with parsing the throes of regulation — such as trust in DeFi, bookended by jokes about the Terra debacle.

“It’s no question that crypto has huge potential to develop,” said Simonas Krėpšta, a Lithuania central bank board member, during one of the first Tuesday sessions, titled “How far can you go with Crypto FOMO?” Lithuania is home to some 400 crypto exchanges, Krėpšta said, but lacks a formal licensing program.

Added Krėpšta: “If the crypto sector wants to be accepted more broadly, there needs to be more trust between the community and the industry – stablecoins should be stable. We need regulators to better understand the sector, but crypto needs to be quite bold and sometimes even volunteer for stricter regulation than traditional finance.”

“Our first foray into crypto was in 2014 when we started accepting bitcoin payments,” Mathew said. “The market wasn’t quite ready – people aren’t trying to pay for goods and services in bitcoin, this is actually the obstacles for retail payments.”

Mathew added Stripe, which wants to “serve and inspire growth in the GDP of the internet,” deems retail payments quite ready to be disrupted by digital assets, but payouts in stablecoins “make a lot of sense today.”

For an event about the future of money, bitcoin, ether and other non-stablecoin cryptocurrencies were mentioned very little, outside of a “how to decarbonize crypto” fireside chat tucked away at a “Sex and Drugs and Rock and Roll Bar” on the final day.

There were, however, discussions of NFTs and the potential of Web3 to transform behaviors. Perhaps more aptly, merge physical behaviors that have existed for thousands of years (collecting shiny objects) with the metaverse.

Vlad Panchenko and Ori Levi, respectively CEOs of DMarket and NFTrade, alongside Julia Morrongiello, head of European growth at Zero Hash, ultimately disagreed as to whether gaming, ticketing or fractionalizing exotic and illiquid investments were NFTs’ killer app.

“The potential for NFTs tied to in-game items are what I’m most excited about,” Levi said behind sunglasses, wearing a loud shirt that was somewhat out-of-place in the expansive RAI conference center.

Levi went on: “People invest so much of their lives into games, and with NFTs you finally have ownership.” He predicted that traveling between metaverses with in-game NFT items will happen “very soon.”

On the mainstage, Helen Hai, head of NFTs and fan tokens at Binance, leveraged much of her 20-minute spot to detail philanthropy propelled by the exchange’s charity arm. She also pitched the potential role of blockchain and NFTs in the “fourth industrial revolution” – a process pegged to meld physical and digital constructs over the next century.

For Berlin-based startup Finoa, though, institutional interest has grown fast — and not just in stablecoins. One year ago, Finoa closed a $22 million Series A round led by major UK venture fund Balderton Capital. At the time, it boasted more than 250 clients, including German equity specialist Bankhaus Scheich – that figure is now beyond 300.

The company has mostly served as a trusted (and regulated) third party – keeping digital assets safe for various crypto market participants, such as VC firms.

Marius Lunding Smith, Finoa’s head of strategy, told Blockworks the company is now moving to become a “fully-fledged crypto bank by curating access to everything Web3, allowing institutions to participate in a manner they can understand.” In other words: under strict regulatory and security parameters.

Smith said stablecoins weren’t a focal point for customers, although there is demand for crypto-native interest accounts, which are generally denominated in US-pegged stablecoins.

Still, Finoa found a few years back that bitcoin and ether claimed most of the demand. Now, crypto-savvy investors — for instance crypto funds that just invested in a new token — want custody and staking services for the newer layer-1 tokens, such as NEAR, polkadot, tezos, flow and MINA.

As to whether finance incumbents will move beyond their apparent obsession with dollar-pegged stablecoins, Smith expressed a holistic view:

“There will always be the ones chasing the highest yields which come at high risk. We need to be there and enable participation and access for the ones that have that appetite. For others, it’s about ensuring they can interact with the most mainstream tokens in a manner that makes sense – conservative, good yields that are more sustainable, safe, and have lower risk.”

And, so, curation is necessary when offering digital assets to institutional-types, Smith said. There are platforms that allow participation in practically every cryptocurrency, which works if they’re purely a technology provider, but operating within regulatory boundaries is a different story.

The crypto industry has a responsibility to make sure the ecosystem can be understood by traditional systems.

“Otherwise, we will never really get mass adoption,” Smith said.