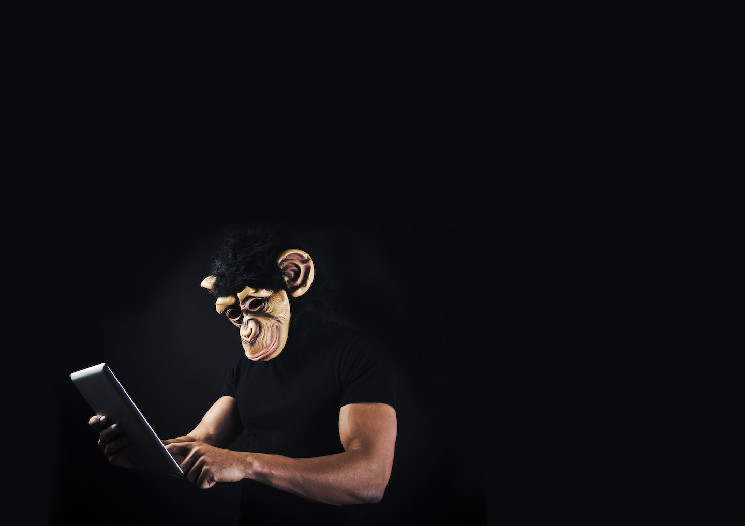 For the past few months, the puppetmasters behind the Bored Ape Yacht Club NFT collection have been gearing up for their biggest product launch yet: a mysterious new service called Otherside.

So far, all signs point to Otherside being a competitor to “metaverse platforms” like Decentraland and Sandbox, or online social spaces in the vein of Second Life. And while there’s still no approximate timeline for the platform’s debut, Otherside is facing its first major test this coming weekend in the form of a massive sale of non-fungible tokens.

A consequence of the buzz is that ape fans are trying to charge each other for the privilege of being an early investor in these NFTs, offering to sell specially registered Ethereum wallets connected to strangers’ personal information.

Of course, buying access to a random person’s crypto wallet is extremely risky for a few reasons, not least of which is that – in this case – it almost certainly constitutes fraud.

As with Decentraland and Sandbox, the economy of Otherside seems to revolve around scarce plots of digital “land.” Metaverse platforms are usually structured as massive grids – once you buy the deed to a patch of land as an NFT, it’s yours to play around with until you decide to sell.

The difference with Otherside’s land system is that, at least for this initial crop of investments, you’ll need to fork over some identifying information before you can buy in.

It works like this: Otherside’s plots, known as “Otherdeeds,” cost 305 ApeCoin each, which is about $6,600 at today’s prices. ApeCoin is sort of like a blockchain-backed version of company scrip – the official coin of Yuga Labs, the corporate entity behind the Bored Ape Yacht Club and Otherside. There are 55,000 Otherdeeds, all of which will go on sale Saturday, April 30.

In March, Yuga Labs began asking people to submit their Ethereum addresses (along with that personal information) via a form on a mysterious website, somethingisbrewing.xyz. If you registered your wallet on this site before April 25, you’re eligible to mint some of those Otherdeed NFTs when they launch on Saturday. Yuga Labs is limiting mints to two per registered address, so you’ll need about $13,200 in ApeCoin to fully juice each one.

Crucially, the submission system on somethingisbrewing.xyz was free – because any curious trader could simply connect a wallet to the site for a shot at registration, there are probably a lot more registered wallets than traders who actually have the requisite $6,600 in ApeCoin.

And thanks to that personal information now associated with each registered wallet (the site asked for a passport, national ID, or driver’s license, along with proof of residence), those registered wallets are also fully “KYC’d.”

“KYC,” an acronym for “Know Your Customer,” refers to a set of requirements imposed on anyone trying to interact with most financial services companies. In the U.S., these companies are regulated by the government – it’s why you need to submit your driver’s license if you want to move your money out of a centralized crypto exchange, like Coinbase.

In the world of traditional banks, KYC-ing customers (it’s a verb, too) is standard practice, a useful tool for combating money laundering. In crypto, though, it’s something of a dirty word. Bitcoin was built around the idea that transactions could stay pseudonymous; to crypto purists, KYC feels like a vestige of an outmoded surveillance system.

And yet the system isn’t without loopholes. The glut of KYC’d addresses has already created a kind of secondary market on Twitter: enterprising traders are attempting to sell these KYC’d Ethereum addresses to anyone who wants a shot at the Otherside mint.

It might not make sense for a Bored Ape “whale” – someone who owns an Ape or two, and can afford the $13,000+ buy-in – but for the army of strivers who just happened to register their wallet on that website before April 25, it’s an opportunity to make a quick buck.

A Twitter user called clav.eth told me he’s selling his KYC’d address for exactly that reason.

“It helps fund my passion for NFTs, I can’t afford to mint @ 305 APE,” he wrote in a direct message on Twitter.

Twitter is full of calls to sell these addresses, and even though many are nonspecific and potentially unserious, respondents are definitely biting.

Why this is a bad idea

Setting aside the obvious legal and ethical problems with using someone else’s identity to access a financial service, when you buy one of these wallets, what you’re really getting is a “seed phrase.” This is an ordered set of words that functions like a password for a given wallet. But even if you buy someone’s seed phrase, you can’t erase it from that person’s memory (or, more likely, their phone’s notes app).

Buying the seed phrase for a wallet is like buying yourself administrative privileges without demoting the first administrator – it’s not a transfer of control as much as an addition. And since the seller will always control the wallet they’re selling, they can reclaim its holdings at any time. Or, the seller might code a bot to automatically drain the wallet once the NFTs are in there.

Also, as the entrepreneur Scott Lewis pointed out, a scammer could easily offer the same seed phrase to multiple buyers.

Clav.eth said that while “in theory” he could do this to any prospective buyer, he “wouldn’t.”

Another Twitter user – the charmingly named cockwaffles3000 – explained that he’s been asking sellers to reveal their personal information (“selfie including passport + note stating kyc address”) before going ahead with any transaction.

But even then, he admits, it’s “hard to put it past them that they’ll resist stealing” the $13,000 in NFTs, once minted.

When I asked cockwaffles why he would ever trust a stranger with that responsibility, he gave offered a somewhat menacing response:

“If they’re doxed you can find them…. not hard to intimidate someone when that much $ is on the line (prob 6 figs+ down the line upon launch).”

Still, scammers abound. One trader, after teasing that he’d successfully pawned a KYC’d wallet, told me I’d need to cough up 0.1 ETH (about $300) if I wanted any more details for this article.

Meanwhile, neither clav.eth nor cockwaffles appear to have had any luck actually closing a deal. And time is running short – Saturday’s mint looms.