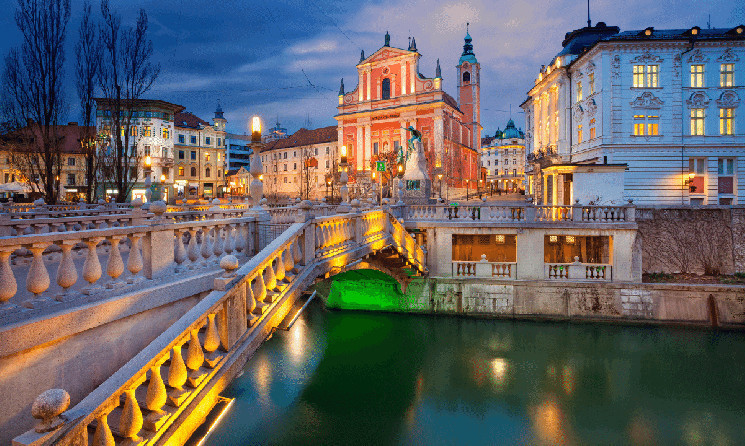 A research conducted by the aviation company Fast Private Jet estimated that the central European country – Slovenia – is the world’s most crypto-friendly state. Moreover, its capital – Ljubljana – is the most welcoming destination in Europe for digital asset businesses.

The Italy-based aviation firm – Fast Private Jet – performed a global study to determine which countries have the most venues where cryptocurrencies are accepted as a payment method. Slovenia ranked first, while another Central European nation – the Czech Republic – held the second position. Argentina, Japan, Spain, and Colombia rounded up the top 6.

Slovenia has 72 shops and 33 sports venues that accept bitcoin or altcoins as a means of payment. Its capital city – Ljubljana – is also the most crypto-friendly destination in Europe. Currently, it has over 137 businesses and 584 different locations that allow digital asset payments, while its largest shopping center is named “BTC City.”

Prague – The Czech Republic’s capital – is the second most crypto-friendly European destination. Among its crypto attractions is the coffee-house Paralelni Polis, where customers can pay only in bitcoin.

The third most crypto-welcoming city in Europe is Spain’s Madrid, while Malta ranked at the bottom of that statistics.

Fast Private Jet’s study touched upon the USA, too. It revealed that New York, Los Angeles, and San Francisco have the most restaurants, cafeterias, and businesses that accept crypto as a payment method.

Unsurprisingly, China is among the least crypto-friendly countries around the globe. Last year, the local authorities imposed a total ban on all digital asset endeavors on Chinese soil.

Oman, Egypt, Algeria, Qatar, Iraq, Tunisia, Morocco, and Bangladesh also have a hostile stance on the industry and were placed next to China.

Earlier this month, a Coincub research estimated that Germany is the most crypto-friendly nation for Q1, 2022, while Singapore and the USA are respectively second and third. However, the company’s study differed from Fast Private Jet’s one as it considered factors like cryptocurrency laws in the different countries, the number of fraud cases, and the availability of digital asset courses.

Slovenia Is Among the Most ‘Crypto-Ready’ Countries

This is not the first time the Central European nation has found its place in similar studies. Last year, the digital asset platform – Crypto Head – determined that Slovenia, with an index of 5.96, is the 7th most “crypto-ready” country.

To perform the research, the company combined several factors, including annual crypto Google searches per 100,000 people and the number of ATMs.

Considering the USA has over 30,000 crypto Automated Teller Machines, it was no wonder that it held the first position. Interestingly, the Mediterranean island of Cyprus ranked second.