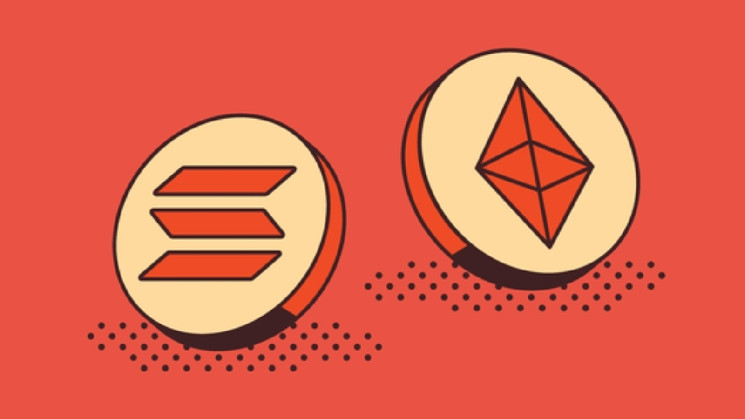 The two preeminent smart contract platforms each ran into performance problems on Saturday after high traffic demands from NFTs temporarily brought transactions to a standstill.

The Solana blockchain halted — again — and had to be restarted. Ethereum continued unabated, but the cost of blockspace skyrocketed to levels not seen since 2020.

While the proximate cause of the outages was the same — high traffic — the source of demand and each network’s response to it was quite different.

Solana was fully offline — blocks were not being produced — for around 8 hours, according to status.solana.com, resuming operation only after network validators performed a “cluster restart.”

The outage stemmed from extreme congestion due to activities of specialized bots, or automated software programs, trying to “blind mint” NFTs (non-fungible tokens) and immediately resell them on secondary markets. The traffic became so intense that the network suffered a breakdown in consensus — a cascade effect which ultimately shut the blockchain down.

Yesterday some validators recorded in excess of 100gbps in network ingress and 4 million packets per second (i.e. transactions being submitted).

“Restarts are incredibly frustrating, time consuming & upsetting to SOL supporters, investors and everyone else involved. This one went off remarkably well, all things considered, but it’s not ever a desirable situation,” tweeted one Solana validator, in a thread endorsed by Solana Labs co-founder Anatoly Yakovenko.

Most of these transactions came via Metaplex, whose Candy Machine tool Solana-based NFT projects rely on to launch their collections, according to the group. In response, Metaplex is instituting a first-time 0.01 SOL fee to prevent bots from effectively spamming the network with invalid transactions during attempts to mint.

Solana itself currently lacks a fee market to control spam or sudden surges in traffic, although one was proposed by Yakovenko in January, a suggestion he reiterated last month.

Solana also suffered major outages in January 2022 for similar reasons, but involving arbitrage and liquidation bots, rather than NFT flippers. Unlike that incident and a 10-hour outage in September 2021, the price of Solana’s SOL token was relatively unscathed, falling temporarily by about 9%, and now trading for $88.16 per data collected by Blockworks.

Ethereum never stops, but it does get pricey

The Ethereum network has a near perfect uptime record since its inception, but periods of high demand can make the blockchain costly due to extreme spikes in transaction fees. That’s what happened when Yuga Labs’ latest NFT project — a virtual land sale inspired by Bored Ape Yacht Club, called Otherside — launched.

The company called it “the largest NFT mint in history by several multiples.” As of Monday, over roughly 95,000 land plot NFTs are listed on NFT marketplace OpenSea with a floor price of 4.2 ether, or about $11,700.

Would-be landowners in the metaverse project — which does not yet exist — had to qualify for a whitelist, including registration for know your customer (KYC) purposes, and were limited to two NFTs each. But as they attempted to score their swath of virtual real estate, gas fees on Ethereum mainnet shot as high as 8,600 gwei, temporarily sending the cost of transactions into the thousands of dollars.

Ethereum’s fee market is based on supply and demand, but its maximum throughput is around 13 transactions per second, which makes the protocol susceptible to extreme spikes during peak demand.

On top of that, Yuga Labs’ NFTs lacked routine techniques to minimize gas usage requirements, according to Will Papper of SyndicateDAO.

“Of course, gas optimizations are only one part of the equation. You need a better mint mechanism design…Money spent on gas is money that could go to builders,” Papper said on Twitter following the event.

More than 64,078 ETH, around $180 million, was spent during the NFT mint, data from Etherscan show. Due to the Ethereum upgrade EIP-1559 last year, the amount of ether burned shows a commensurate jump on May 1. 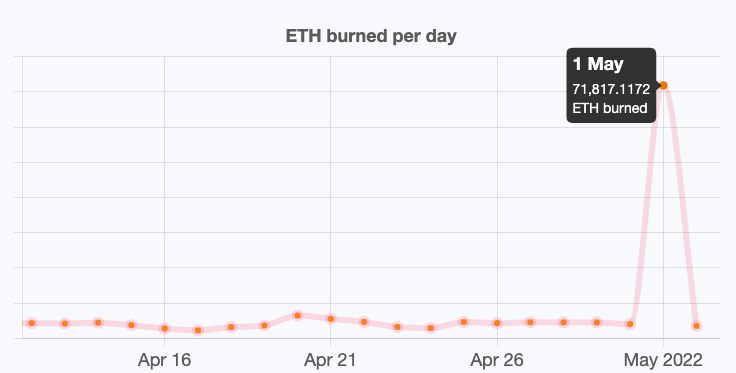 Aside from the policy and technical fixes to prevent so-called “gas wars,” NFT projects have the option to move their mints to Ethereum layer-2 networks like ImmutableX or sidechains like Polygon’s PoS chain.