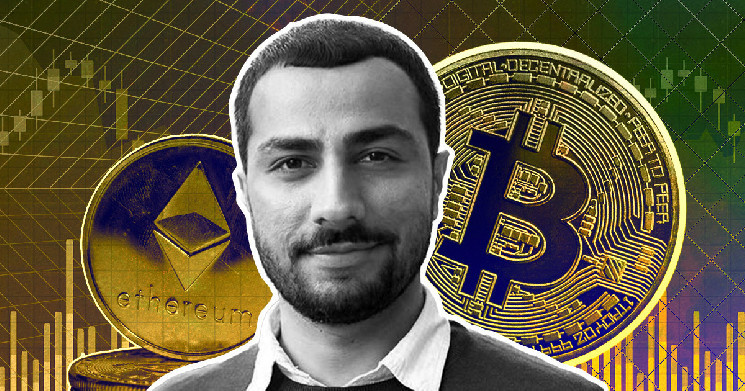 Stacks‘ Bitcoin maximalist founder Muneeb Ali said he doesn’t own any Ethereum since 2018 because it is losing against Bitcoin as money and as the major smart contract platform.

(a) Bitcoin will win as money
(b) Newer L1s will gain market share against Ethereum for smart contracts.

I think the reasoning remains true for coming years as well. Not downplaying developer traction etc of Ethereum.

Ali started his thread by acknowledging Ethereum’s high developer traction and the contrarian nature of his investments. However, he said he was right to think so and pointed out that ETH lost value against BTC between 2018 and 2021.

Ethereum is fighting on two fronts

ETH’s first war is about becoming a “sound money” that can behave as an inflation hedge. According to Ali, “sound money” is durable, stable, and resistant to change. It also has a predictable supply and operates on a simple base layer. He says:

“Bitcoin wins here hands down. Simplicity vs complexity is a trade off. Pick one.”

ETH is fighting its second war to maintain its dominance in the market as the leading smart contract platform, and Ali argues its losing.

Significant players in the smart contract market like Algorand, Avalanche, Solana, NEAR, and Stacks are rapidly developing alternative smart contract solutions. As a result, they gain market share, which shrinks Ethereum’s.

“[…] from a purely investment perspective, a basket of new quality smart contract L1s outperformed ETH by a lot. “

Ali finished his thread by arguing that there are better options on both fronts, Bitcoin being the first and most prominent.

Is ETH really losing against BTC?

Recent price changes on the ETH/BTC support Ali’s arguments. On 27 May, ETH broke the 0.065 support level it had held since November 2021.

One of the main reasons for the decline is the hesitation caused by the upcoming merge. Investors hesitate to be bullish on ETH under bearish market conditions and do not know what will happen once ETH switches to proof of stake.

In addition, Ethereum market dominance has been at its softest level since March 2022, while Bitcoin dominance has increased by 10% since May.

Another alarming indicator came from Ethereum’s co-founder Vitalik Buterin himself. He posted a series of tweets listing the contradictions in his thoughts last week.

Most of these contradictions pointed out that Buterin was not happy with Ethereum’s protocol design. He went as far as saying he’d like Ethereum to transform into a more Bitcoin-like system.

Contradiction between my desire to see Ethereum become a more Bitcoin-like system emphasizing long-term stability and stability, including culturally, and my realization that getting there requires quite a lot of active coordinated short-term change.

He  continued to sympathize with the Bitcoin maximalists such as Muneeb Ali and said:

“What if Bitcoin maximalists actually deeply understand that they are operating in a very hostile and uncertain world where there are things that need to be fought for, and their actions, personalities and opinions on protocol design deeply reflect that fact?”