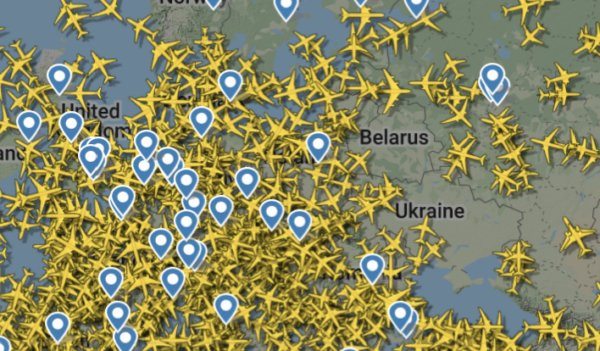 The German DAX is down 3.1% today while the French CAC index has lost 3.2% amidst some papers claiming Europe is 48 hours from war.

The Russian RTS index lost close to 5% at one point in a volatile day of trading that has seen oil briefly jump to $95.

Bitcoin briefly fell below $42,000 overnight with it maintaining the level to currently trade at $42,400.

That’s while the German chancellor Olaf Scholz has landed in Kyiv and is meeting Volodymyr Zelensky, the Ukrainian President.

Little is expected here beyond the German checkbook, with the real show tomorrow when Scholz meets Russia’s president Vladimir Putin.

It will be the first time, since Stalin met Hitler, that a German chancellor will be discussing war and peace with a Russian President in Europe.

We shouldn’t expect any breakthrough however, the Germans say, while the Brits claim there’s a whiff of Munich in the air.

It will be Germany of course that has most to lose if anything comes to anything, and thus whatever is said in public you’d expect a real response in private.

Such ‘real’ response can range from reminding Russians that Europe has at its disposition the Swedish intelligence service, the French navy and the Turkish drones, to the pointing out that there is no Russia without Europe and so any frontier should be very far from the continent, to the carrot in clarifying it was Russia that chose to disintegrate with Europe and can choose to move towards re-integration, though of course under liberalism not hybrid state comi-capitalism.

Private companies owned by the Russian government now employ some 40% of all Russians with it unclear whether the country is back to anyone left of Stalin on economics being a Nazi.

The throwing of that word towards the capitalist and democratic Ukraine may well suggest so, but the Russian people do not generally buy the state propaganda, especially anyone under 40.

That’s because the state’s chokehold on the economy and their freedoms is impoverishing them with most Russians tired of war after close to two decades of adventures with little gain to show in the pockets of babushkas.

The German civil service therefore will be on display with Scholz potentially underestimated as no one heard of him outside of Germany until last week when he gave an interview to CNN in English.

Never, he said to whether Germany would deny airspace to UK. The airspace in Ukraine however, as well as Belarus and bordering southern Russia, is currently barren as pictured above.

After a decade of stagnation in Europe and a collapse in the GDP of Russia, the last thing you’d want is more economic destruction, rather than value creation.

As if the disruption of trade in Europe’s near neighborhood was not enough, the specter is raised of disruption in the continent itself now, which may harden opinion in Europe.

Scholz thus would do well to remind Putin that unlike him, the German chancellor is bound to the views of the German people and also of Europe as a whole because you’d think Germany would do anything to keep Europe.

Views that may change and while Europe wouldn’t attack directly, there’s plenty it can do to respond in a proportional manner to similar interests that Russia may have.

A Russia that politically seems to be stuck in time. While half of Europe, in great part thanks to Germany, has been raised to first class standards, the vast majority of Russia is in disrepair.

Some skyscrapers shine in Moscow, but outside it you find little difference with 40 years ago.

Their education system is also lacking with many in Russia unable to speak english, although some do, the language of science.

That’s the gulf for Scholz, whom we expect to come back with something because the people of Europe will not tolerate any disruption in this continent.

Ahead of that meeting stocks are now recovering a bit as Russia makes claims some of the troops may be withdrawn in an atmosphere where no one can quite be sure until they do with Putin telling his foreign minister to keep talking.

So we’ll have to wait and see what Scholz says tomorrow with failure arguably not quite an option for the public.