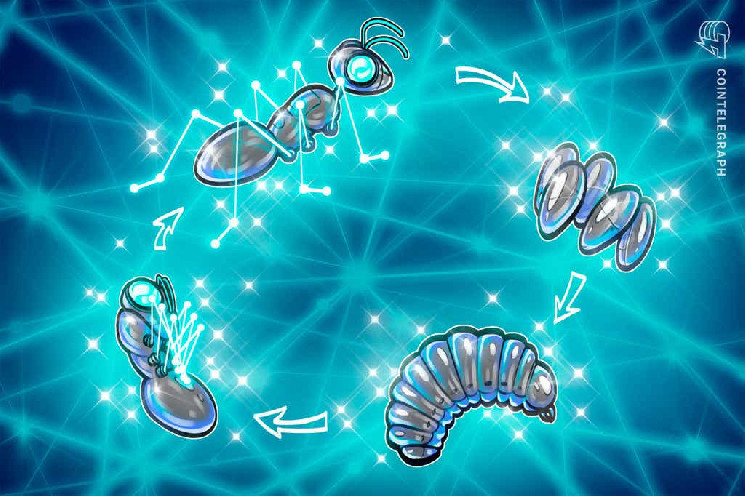 What is a smart contract in blockchain?

Smart contracts are essentially programs that run when specific criteria are satisfied and are maintained on a blockchain.&nbsp;

Smart contracts are usually used to automate the execution of an agreement so that all parties can be sure of the decision right away, without intermediaries or wasting time. They can also automate a workflow, starting when certain circumstances are satisfied. 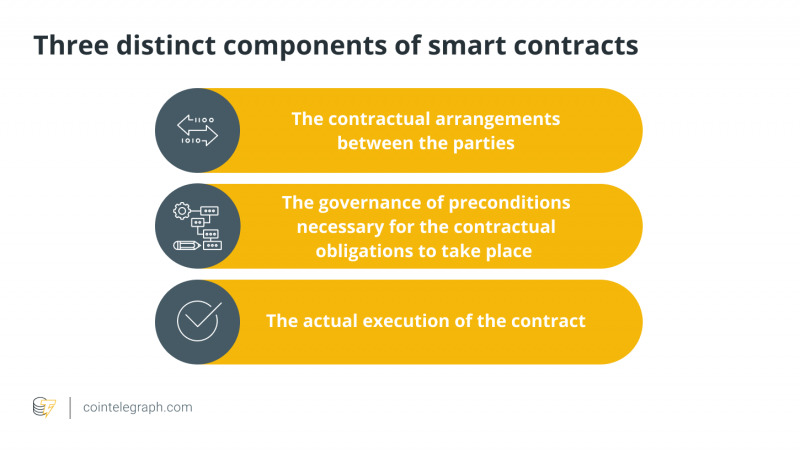 Simple «if/when…then…» lines are written into code on a blockchain to make smart contracts work. When preset circumstances are satisfied and validated, the activities are carried out by a network of computers.&nbsp;

These activities could include transferring payments to the appropriate parties, sending alerts, registering a vehicle, or issuing a ticket. When the transaction is complete, the blockchain is updated. That means the transaction can’t be modified, and the results are only visible to those who have been granted access.

Ethereum (ETH) is the most widely used smart contract blockchain for running automated agreements. Smart contracts on Ethereum are often written in Solidity, a Turing-complete programming language, then compiled into low-level bytecode that the Ethereum Virtual Machine may execute.

Polkadot is another smart contract ecosystem established by Gavin Wood, one of Ethereum’s co-founders. After understanding that ETH is still a long way from attaining its potential as a safe and scalable system, he opted to launch his blockchain network.

Financial applications such as trading, investing, lending and borrowing are examples of smart contract use-cases. They can be utilized in a variety of industries, including healthcare, gaming and real estate, as well as to construct entire company structures.

What serves as a baseline for DeFi smart contracts?

Distributed ledgers and cryptocurrencies are two technologies that serve as a foundation for decentralized smart contracts.&nbsp;

Virtual money developed and traded on digital platforms, such as Bitcoin (BTC), is characterized as an «unregulated, decentralized, digital crypto-currency» by the European Central Bank. In the 1990s, there were already initiatives to establish a digital currency. Those attempts, however, necessitated the use of a bank (custodian of ledger) to keep track of the money’s ownership accounts.&nbsp;

Today, blockchains provide a technical solution for disseminating this ledger, or transaction log, across a peer-to-peer network while maintaining transaction log integrity. Unregulated cryptocurrency marketplaces are now possible thanks to this breakthrough.

What phases are involved in the life cycle of smart contracts? 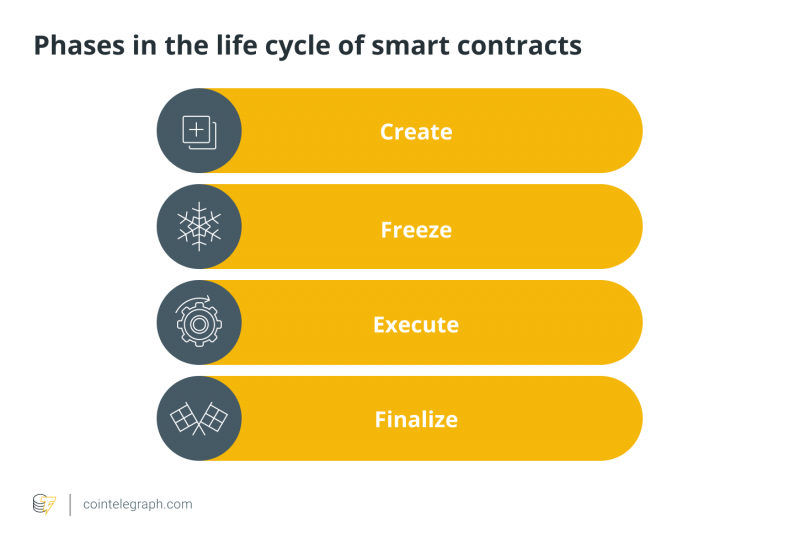 Iterative contract negotiation and an implementation phase make up the creation phase. First, the parties must agree on the contract’s overall content and goals. This is similar to traditional contract negotiations and can be done online or offline. On the underlying ledger platform, all participants must have a wallet. Its identifier is pseudonymous in most circumstances, and it is used to identify the parties and transfer payments.

The transition of requirements into code, as seen in traditional programming languages, necessitates multiple iterations between stakeholders and programmers. Smart contracts will be no different, and several iterations between the negotiation and implementation phases are likely.

During the publication phase, after the parties have agreed on the codified form of the contract, it is uploaded to the distributed ledger. During this phase, nodes in the distributed ledger receive the contract as part of a transaction block. The contract is available for execution once most nodes have confirmed the block. Because decentralized smart contracts cannot be amended once the blockchain has accepted them, any changes to the smart contract will necessitate the development of a new one.

Following its submission to the blockchain, the smart contract is confirmed by a majority of the participating nodes. A price must be paid to the miners in exchange for this service to keep the ecosystem from being flooded with smart contracts.

The contract and its parties are now open to the public and available through the public ledger. During the freeze phase, any transfers to the smart contract’s wallet address are blocked, and the nodes operate as a governance board, verifying that the contract’s preconditions for execution are met.

Participating nodes read contracts that are stored on the distributed ledger. So, how is a smart contract executed? The contract’s integrity is verified, and the code is executed by the smart contract environment’s inference engine (compiler, interpreter). The smart contract’s functions are conducted when the inputs for the execution are received from the smart oracles and involved parties (commitment to goods through coins).

The smart contract’s execution generates a new set of transactions and a new state for the smart contract. The set of findings and the new state information are entered into the distributed ledger and verified using the consensus mechanism.

The resulting transactions and updated state information are put in the distributed ledger and confirmed using the consensus process after the smart contract has been performed. The previously committed digital assets are transferred (assets are unfrozen), and the contract is completed to confirm all transactions.

What are the pros and cons of the smart contract’s life cycle?

Each phase of a smart contract’s lifecycle promises to lower costs, boost transparency and build confidence, but it also brings new obstacles, costs and legal incompatibilities.&nbsp;

Because the formation of decentralized smart contracts is separated into two phases, a traditional clause negotiating phase and a code implementation phase, the fees saved by using fewer lawyers must be evaluated against the expenses of smart contract programmers.

The decentralized execution infrastructure and participating actors take on the role of contract enforcers thanks to the cryptographically secure link between contract execution and payment finalization. This built-in conflict resolution process improves openness and fairness for all parties involved.&nbsp;

The irreversible nature of concluded smart contracts, on the other hand, raises additional problems concerning redress because the resulting collection of transactions is immutable and irrevocable by definition.

While several aspects of a smart contract’s life currently necessitate specialized technical knowledge (such as programming a smart contract), the expected widespread adoption of decentralized smart contracts, fueled by the promise of cost savings, will undoubtedly lower existing barriers to entry and lead to the development of user-friendly smart contract creation, testing and sharing environments.

Can a smart contract be destroyed?

Yes, smart contracts can be destroyed using the selfdestruct function.

Ethereum smart contracts provide a selfdestruct function that allows them to destroy a contract on the blockchain system. It is, however, a two-edged sword for developers. On the one hand, the selfdestruct function allows developers to delete smart contracts from Ethereum and transfer Ether in the event of an emergency, such as an attack. On the other hand, this function might add to the development’s complexity and provide an attack channel for attackers.&nbsp;

When security flaws are discovered or the functionality of a smart contract has to be upgraded, developers kill the contract. They will launch a fresh version of the contract after resolving errors or upgrading the current version.

Attackers discovered a vulnerability called Reentrancy in a smart contract of the Decentralized Autonomous Organization (DAO) in 2016, and the DAO organization lost 3.6 million Ether ($270/Ether on Feb. 2020) as a result of this vulnerability. This infamous attack is sometimes referred to as a DAO attack.

The DAO hack lasted several days, and the organization was unaware that their contract had been compromised at the time. Because of the immutability property of smart contracts, they were unable to stop the attack or move the Ether. If the contract has a self-destruct function, the DAO organization can quickly transfer all of the Ether and avoid financial damage.