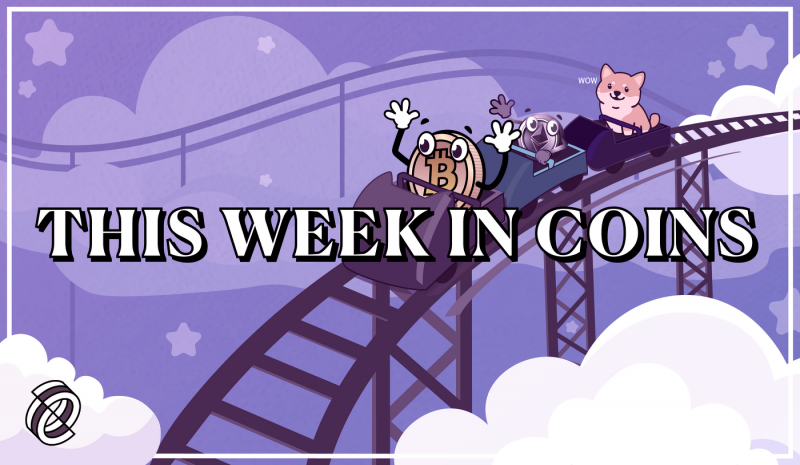 This week in coins. Illustration by Mitchell Preffer for Decrypt.

After slow starts to the year, Bitcoin hit a 2022 high on Monday and Ethereum posted big gains into the weekend, and several top 30 currencies mooned over the last week.

Bitcoin on Monday hit a 2022 high of $48,086.84, a price not seen since New Year’s Eve. As of Saturday, the world’s favorite cryptocurrency had fallen slightly to trade at $46,722, according to CoinMarketCap.

Anticipation for Ethereum 2.0 could be one key factor driving Ethereum’s price. This week, Google searches for “Ethereum merge” hit an all-time high.

The Merge will be a moment later this year when Ethereum’s mainnet will “merge” with a proof-of-stake system called the beacon chain. Ethereum claims that this major update will solve the network’s well-known scalability and energy consumption problems.

Much of this week’s crypto news cycle once again revolved around regulations.

On Monday, U.S. President Joe Biden released a detailed budget proposal that includes several accounting and tax reporting rules to digital assets. By the White House’s estimate, the government can raise roughly $11 billion from taxing crypto in over 10 years—and nearly $5 billion of that just in 2023.

Biden’s strategy is three-pronged. First, the administration will tax unrealized gains, so even if you don’t sell your crypto after it blows up 25% in a week, those gains will be taxed. Secondly, all crypto holdings over $50,000 in offshore digital asset exchanges and wallet providers will be taxed.

And finally, the proposal asks U.S. banks and financial institutions to share information with the Internal Revenue Service about the value of holdings from non-residents and foreign owners of certain business entities. These rules also hope to catch out U.S. citizens who set up entities to evade paying federal taxes.

MicroStrategy CEO and Bitcoin whale Michael Saylor got a loan to buy more Bitcoin on Tuesday. He leveraged a subsidiary called MacroStrategy to take out a $205 million loan, which was backed by MicroStrategy’s 124,391 BTC reserves at the time. The new purchase increases MicroStrategy’s total holdings to roughly 128,687 BTC—more than $6 billion.

On Wednesday, electronics giant Samsung announced that it was partnering with NFT marketplace Nifty Gateway to create a new NFT market that Samsung TV owners can enjoy from the comfort of their sofas. Users will be able to view, buy, trade, and display NFTs via the upcoming smart TV interface first announced in January.

On Thursday, European lawmakers voted through a proposal requiring crypto service providers, such as exchanges and wallet providers, to enforce KYC (Know Your Customer) standards with individuals who transact more than €1,000 using non-custodial cryptocurrency wallets, such as MetaMask. The draft still has to go through tripartite meetings between the European Parliament, Commission, and Council, but these are largely viewed as formalities.

That same day, The U.S. Securities and Exchange Commission (SEC) asked all U.S. companies offering crypto custodial services to the public to account for customers’ crypto holdings as liabilities and to disclose their nature and amount.

On Friday, two U.S. legislators—Republicans Trey Hollingsworth in the House, and Senator Bill Hagerty—introduced The Stablecoin Transparency Act, which requires stablecoins to be fully backed by U.S. dollars and/or «government securities with maturities less than 12 months.»

If approved, the act also would compel stablecoin issuers like Circle and Tether to regularly publish audited reports of their reserves.

The working week ended with the SEC rejecting yet another Bitcoin ETF application, this time from Cathie Wood’s ARK Invest.