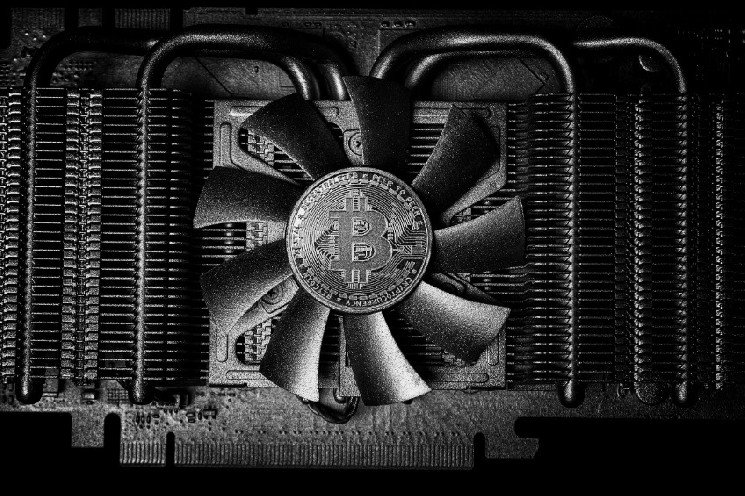 In prior bear cycles, many Bitcoin miners have exited the mining scene in what is known as miner capitulation. Given the recessionary outlook for 2023, is it about to be the worst year for crypto miners?

Elegantly monetized to facilitate a P2P money network, Bitcoin miners buy energy to mine BTC block rewards. During bull runs, when the Bitcoin price is high, miners have high-profit margins as it offsets energy expenditures. This is the period of BTC accumulation and investment in more mining operations.

But during the bear market, miners undergo a Darwinist selection event when the Bitcoin price drops. Only miners who have streamlined their operations while incurring low debt survive the next bull run.

Given previous survival-of-the-fittest selection events, we now see that Bitcoin mining operations have become more resilient. The record hash rate showcases this at a time when the BTC price level returned to November 2020 level. At that point, the network’s hash rate was 90% lower than today. 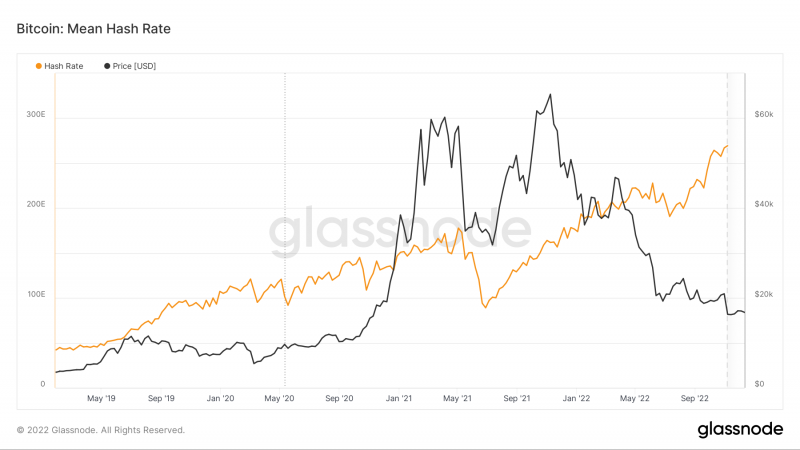 Typically, hash rate plummets along with BTC price. This is yet to happen. Image credit: glassnode

With such a high computing power invested, the network mining difficulty hasn’t decreased significantly, which makes it more energy-intensive to mine BTC. In other words, there is still intense mining competition to find new blocks.

Three Factors Against Miners in 2022

This year, there have been three major negative pressures on Bitcoin price. The Federal Reserve’s liquidity reversal raised interest rates and made capital more expensive, which made the dollar stronger, which is not suitable for a currency debasement hedge like Bitcoin.

In turn, the Fed’s fastest hiking cycle since the early 1980s resulted in asset price suppression. One of the first dominos to fall was Terra (LUNA), owing to its experimental algorithmic stablecoin tied to LUNA. As the last blow, somewhat connected to Terra, the FTX exchange collapsed due to aggressive fraud practices by Sam Bankman-Fried.

In the aftermath, Bitcoin lost ~64% of its market cap since the beginning of the year, from $876 billion to $320 billion. Likewise, confidence in the crypto sector itself has been eroded, manifested as over $3.7 billion worth of BTC left exchanges.

With severe BTC price suppression comes the lack of profitability to mine bitcoins. We can see how this plays out with the hash ribbon technical indicator.

Consisting of short-term (30-day) and long-term (60-day) moving averages (MA), the hash ribbon tracks how much computing power (hashrate) is invested in the network. The difference between the two is then displayed as a line graph. A falling hash ribbon indicates lower miner interest as fewer mining hashrates are put to work.

In turn, this indicates potential bottom, followed by readjusted network difficulty. In the first week of December, the Bitcoin hash ribbon golden cross failed for the first time in Bitcoin’s history. This means that the 30-day MA didn’t go over the 60-day MA, but under it – a dead cross.

This indicates a bearish signal of increasing mining hashrates grinding to a halt right after the FTX collapse. The last hash-ribbon return was in early June, as seen below. Likewise, Bitcoin miner outflows hit a 6-month high at the same time, as miners started to sell their BTC holdings. In numbers, miner revenue per TH (terahash) dropped down by 77.4%, year-over-year. However, as the chart shows, miner revenue usually rebounds. That’s because Bitcoin’s network difficulty decreases with lowered hash rate inputs, making it once again more profitable to mine BTC. To put it differently, miners that stay in the game during capitulation will benefit the most. But who can survive the longest?

Restructuring of the Bitcoin Mining Industry

Bitcoin mining companies that hit the right balance between expansion and debt are most likely to survive. More resilient players will then acquire the losers. Case in point, when Texas-based Compute North declared bankruptcy in September, Marathon Digital looked into its holdings, stating that $22 million out of the remaining $42 million in deposits are recoverable.

According to the bankruptcy filing, Compute North’s assets are worth between $100 million and $500 million. Two weeks after FTX implosion, Australian-based Iris Energy had to turn off some of its mining rigs used as collateral for a $107.8 million loan, lowering its hashrate to 3.6 EH/s.

Core Scientific (CORZ) had the sharpest plunge at the end of October as the most significant Bitcoin miner in the US. This was just after the company announced the suspension of principal and interest payments, possibly indicating bankruptcy ahead. However, the CORZ stock rallied last week by 56% after receiving a $72 million injection from B. Riley financing firm. 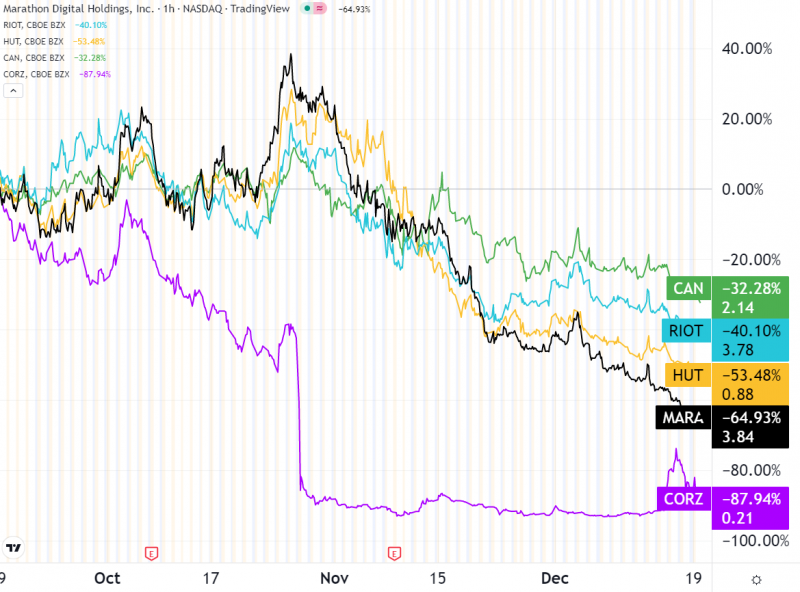 Launched after the Great Recession of 2008, Bitcoin has never experienced a deep recession. Yet, if a hard landing is in store for 2023, Bitcoin will likely go even lower. After all, it is still perceived as a risk-on asset by institutional investors.

For instance, in March, Argo Blockchain’s mining in Texas suffered a massive electricity cost surge from $0.02 per kWh to $0.06 per kWh. As a result, the company failed to secure a $27 million strategic investment in October. Recently, Will Foxley from Compass Mining speculated that Argo too would go under.

In the end, the crypto-mining industry will once again consolidate. The relief in 2023 can only come from two sources – a Fed pivot and lower energy prices. The former may be in the cards unless the Fed continues to steer in uncharted waters.

Do you think the measure of the Bitcoin network’s security, its hash rate, will reset to a level of two years ago? Let us know in the comments below.