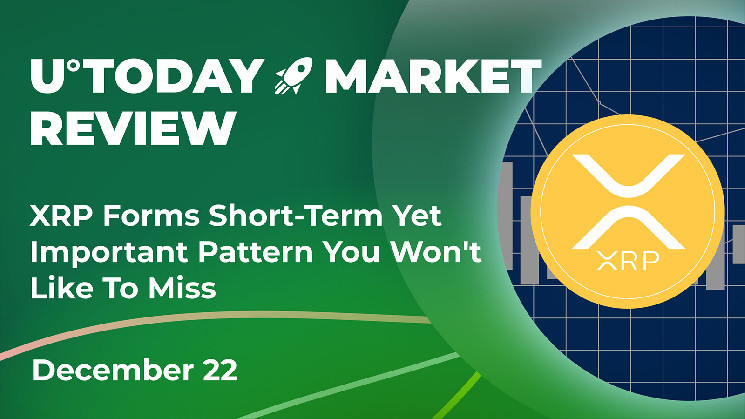 Financial markets are entering pre-Christmas mode with volatility and trading volume tanking, and assets entering prolonged rangebounds until the holidays are over. Unfortunately for a market that has gone through an awful year, a lack of inflows could be fatal. Here are how some cryptocurrencies are getting ready for cold market days.

A few weeks of anemic performance have finally brought us something, as XRP formed an important chart pattern that could lead us to a volatility squeeze and turn into a foundation for a recovery rally.

The symmetrical triangle we can see on any hourly chart of XRP is not uncommon and often occurs after volatile and strong moves of assets. In the case of XRP, we saw a strong downward impulse on Dec. 16, when the price of the asset tumbled to $0.35 in no time, causing a small cascade of liquidations.

In case of a successful execution of the pattern and an upward breakout, we will see a volatility spike and a potential return to pre-dump levels at $0.37. Unfortunately, it is not yet clear where XRP or any other assets on the market right now will find the buying power they catastrophically need.

It is no secret that some investors tend to take profits from their existing positions or gain a little bit more liquidity ahead of Christmas. According to the general market composition, the majority of digital assets lost a portion of their value yesterday. The reason behind the short-term plunge could be tied to the increased selling pressure we witnessed on the markets yesterday.

As U.Today has covered, Shiba Inu saw an enormous 72.46 billion SHIB sale spike as one of the biggest whales on the network decided to close some of his positions. Such a large one-time injection of tokens on the market caused, as expected, a small price drop, considering the lack of liquidity Shiba had.

Dogecoin has finally reached the support level the whole market has been waiting for. The cryptocurrency has lost more than 27% from the local top and now reached the price level of $0.075, which represents a solid support level for the meme coin.

Unfortunately, technical analysis is not the only thing that moves money on financial markets. The fundamental state of the industry right now is not perfect for assets like Dogecoin and Shiba Inu as risk demand remains at an extremely low level, and both meme tokens have no real use that would push their value upward without an excessive inflow of funds into the market.